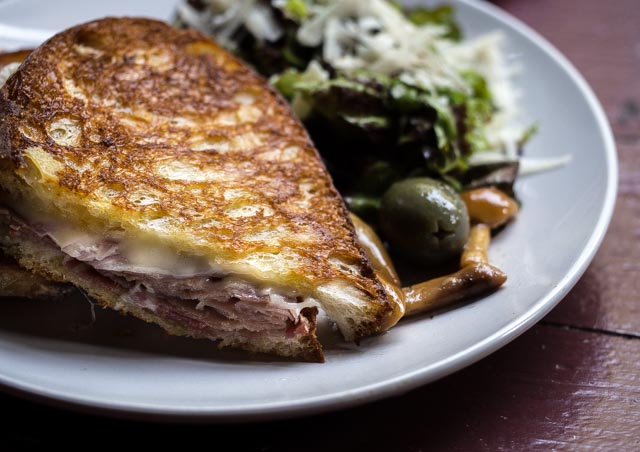 Italian Grilled Cheese Sandwich. What is this exactly? It’s grilled and it’s got cheese but that’s where the similarity to the old diner style grilled cheese ends. Grilled in olive oil and stuffed with your choice of cotto salami, prosciutto, or both with a meltingly soft slab of fontina and you’re ready to bite in so let’s get started: 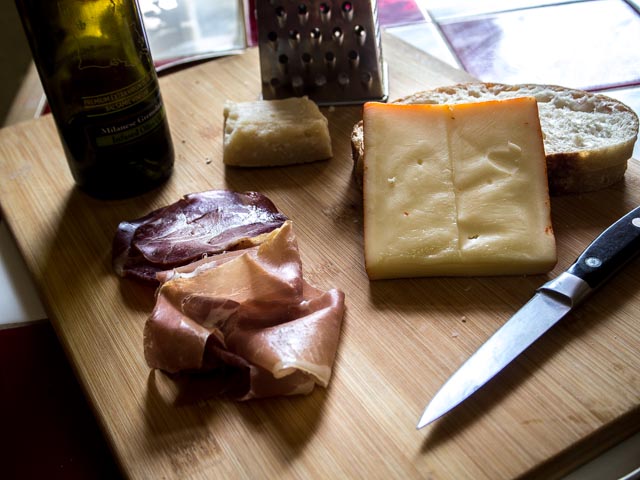 I like ciabatta but if you don’t have it a nice artisan sourdough will be good (if it has rosemary, even better!).  The cheese should be a soft meltable variety and I love Fontina for that. The meat filling can be one or several cured Italian iterations of ham. I was able to get these at Target where they sell an assortment in a plastic shrink wrapped tray. If you’re not near a deli it’s an option.

The olive oil I used here is a flavored version called Gremolata. The flavors are garlic, parsley and lemon and using this oil really makes a difference. I get mine at Bella Nonnas, an olive oil store with locations in Natchitoches and Shreveport, Louisiana. Baton Rouge and New Orleans have similar stores or you can order it.

How to make it

It’s really easy. Heat a pan to medium and pour in a little olive oil. Lay the bread down in it, lay on the cheese and meats and top with the remaining piece of bread. Flip when brown and eat as quickly as possible with a side salad or some olive relish. It can be any kind but my sources in San Francisco give great reports about Wanda’s Olive Pepper Chow Chow so I’m linking it here. And a nice glass of white wine or lemonade. 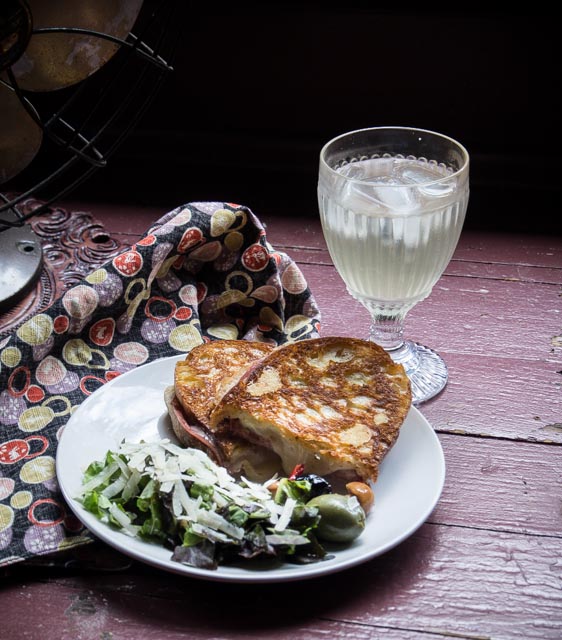 Need a side salad? Try:

Try the Sensation Salad featured here or the Orange Arugula Salad. Both great! Everyone needs a good basic ragu meat sauce and this Ragu all Bolognese is a variation on a neighbor’s I had when I was growing up. She was “Miss Nonna”  to us and her husband was an Angostura bitters importer which I thought was the ultimate exotic profession (and notable by its absence at my high school career day, but no matter.) She made good everything and the only change to this basic ragu is the optional substitution of port wine for red wine and the addition of fennel.

Assemble your ingredients as below and let ‘er rip (but very slowly and at a low temperature).

First, you’ll heat the fat, add the veg and cook for about 5 on medium heat. Then break up the meat and brown it. Add the wine (or wine vinegar), and let cook till the wine is mostly evaporated. Finally, add the tomato sauce, milk, and spices and cook for at least a couple of hours over very low heat. …and yes, that’s an anchovy over there at five o’clock. Just drop it in the pot and it will puree all on its own after a few hours. You won’t necessarily taste it but the dish will taste better.

This can be served over any type of pasta as well as used as a base for lasagna.

Try the ever-popular Louisiana ‘Sensation Salad.’ Its simplicity perfectly compliments the richness of the dish. 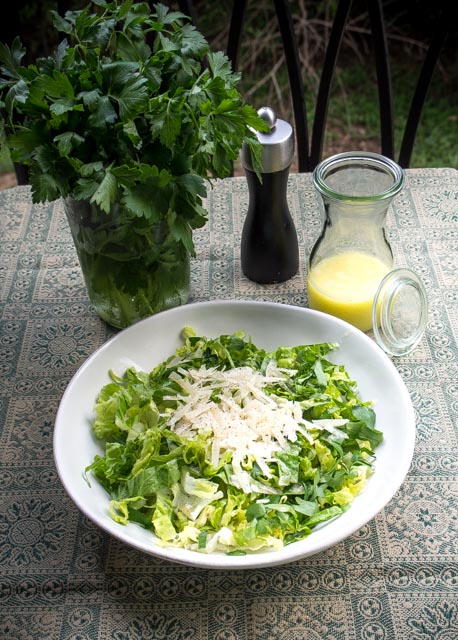 Ragu alla Bolognese
Print
Author: Carine Clary
Cuisine: Italian
Serves: 4
Ingredients
Instructions
Notes
Very low heat means low as you can go. Don’t want to end up with sludge. And check for taste and consistency after an hour. Excellent base for lasagna. And don’t be afraid of the fennel. It won’t make the sauce taste like licorice – in this small amount it just enhances the flavor.
If you have it and are feeling adventurous, substitute in whole or part, ruby port for the wine. It’ll make the sauce a bit sweeter and richer.
If you're running a little short of ground meat don't worry. I've made this with about ⅔rds of a pound and it is plenty meaty. 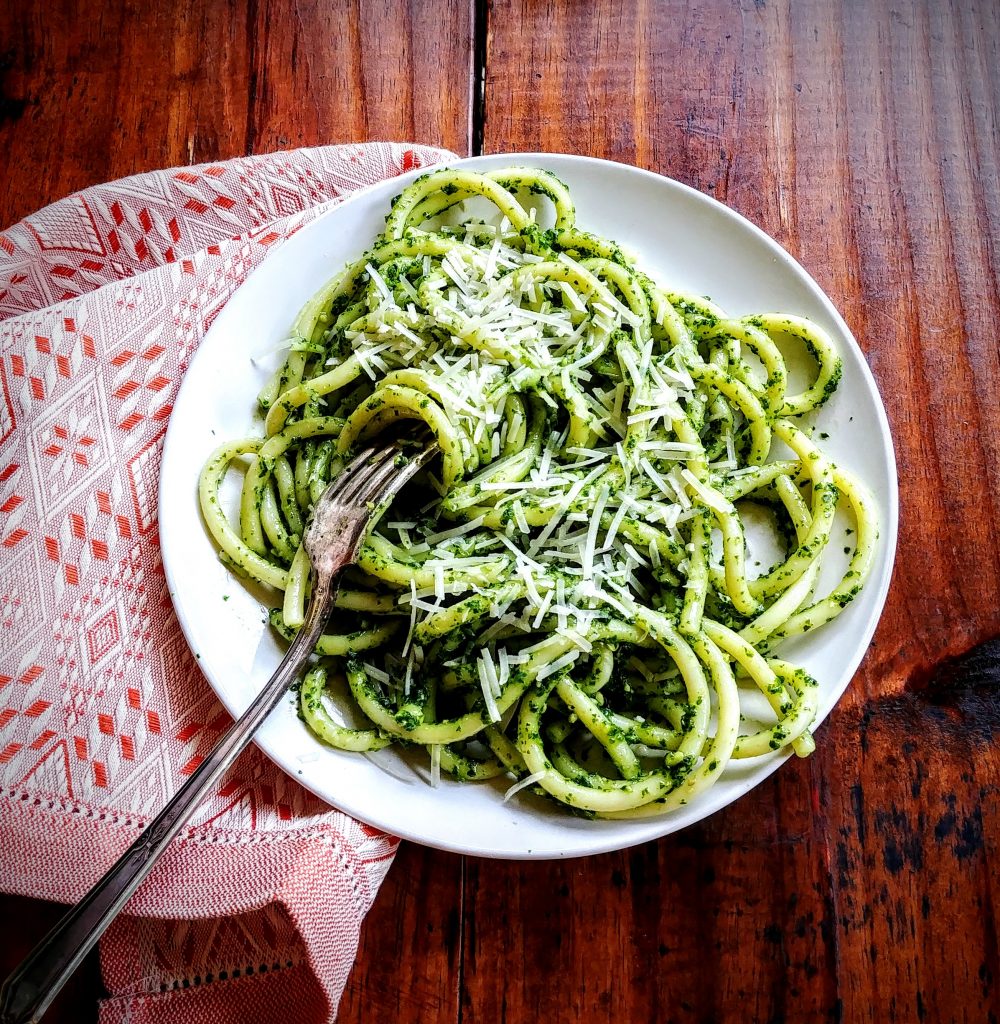 Finally! Lard lady posts an actual vegan recipe which is the above pictured Kale Pesto. And surprisingly it’s good. It all started a few years ago with my friend Tina (sister of Nike who was the originator of Takko Chicken), suggested that I try eating kale as it’s so healthy and all… So I tried it. Once. Ugh. Too much like the turnip greens, I was force-fed as a child.

So I forgot about kale until I had a bite of someone’s kale spaghetti at a restaurant. Eureka! It was delicious, probably also because of all the basil, garlic, and parsley that was in it. However, it occurred to me later that the bitterness that I didn’t like when it was served alone made it the perfect foil for bland pasta. After all, I liked it when it was in my Garbure and that’s a dish where it plays a supporting role.

I also discovered in my odyssey through kale literature that the flavor of kale is greatly mellowed when, as they always put it, massaged. It had never occurred to me to massage vegetables but live and learn. And what better way to massage leaves than to stuff them into a food processor and pulse? Your answer – no better way. And it’s high in vitamin A and C.

So the prep – in any order you like – is as follows. Rinse the kale and cut out the ribs, then chop and drop into the Cuisinart, then toss in the basil and parsley. For optimal smoothness you will need to mince the garlic before adding it to the mix, then the lemon juice. Add some of the olive oil and drizzle in the rest gradually through the feed tube until you reach your preferred consistency. It may be more or less than called for in the recipe. Always add the nuts last since if you don’t you’ll end up with nut butter and believe me, you don’t want that. 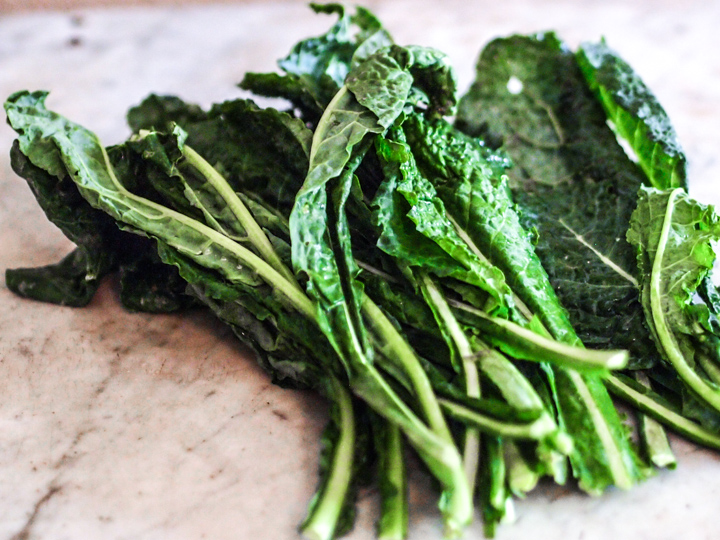 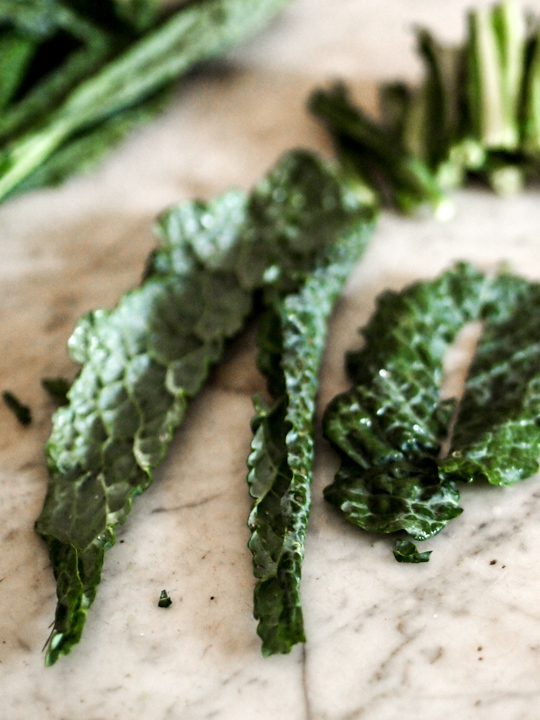 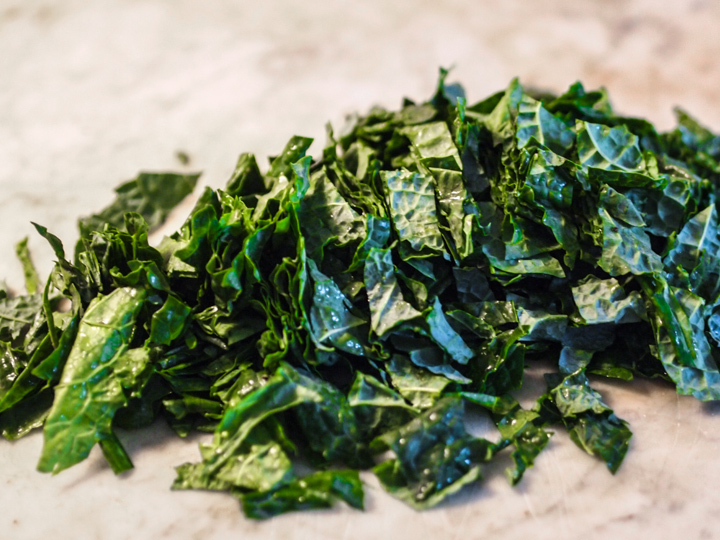 Here it is all mixed up (like me sometimes). If you have any leftover or are making it ahead of time pour a little olive oil over the top to preserve the green freshness. And note the last time I made this I made way too much and the olive oil trick kept it fresh in the fridge for almost a week. 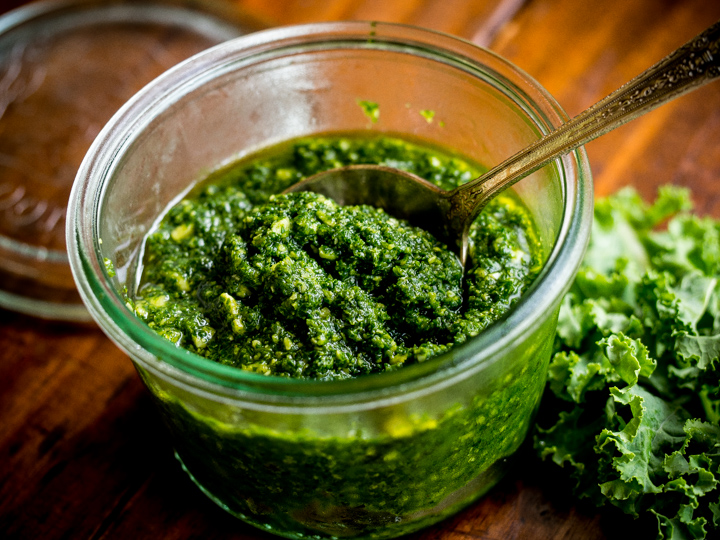 Oh, and last but not least, check that note on the recipe. A spoonful of Boursin cheese stirred into the pasta while adding the pesto is a wonderful thing.

If you are making ahead of time, put in a glass jar and pour a little oil over it to cover before refrigerating.
3.4.3177 Named after Louis, as in Prima, these nachos are at the intersection where Tex-Mex meets Trapani, as in Sicily. The Prima family traveled from Trapani, Sicily to the Quarter where their musical son first cut his teeth on the club scene. You can cut yours on these easy Italian-style nachos that are extremely fast to make.

Nachos’ Tex-Mex origin comes from just over the border in Piedras Negras (which technically makes it Mex-Mex but we’ll ignore that for the moment). They were whipped up by Ignacio (Nacho) Anaya for some hungry military wives from Fort Duncan back during World War II and his original creation consisted only of chips, cheese, and jalapenos. It was an instant hit and cooks have been tweaking it with added ingredients ever since.

I like to keep the add-ons to some kind of reasonable number leaving the “super loaded” specials for sports bars with fully staffed kitchens. Shooting here for tasty but simple.

To start you’ll just shake out that bag a’ chips onto a cookie sheet or cast-iron skillet. Next, you’ll cook up the sausage, warm up the refried beans, add the tomato, onion, olives & fontina, broil and attack!

Fontina cheese is used because it’s Italian and melts better than anything except Velveeta (but tastes a lot better than V.) If you don’t have it Pepper Jack or Colby works well.  After the sausage is cooked you can move it to the side of the pan and warm the refried beans. Then get all the toppings together and start building the nachos. If you’re having a party and need more finger food try:

Prima Nachos
Print
Author: Carine Clary
Cuisine: Italian
Ingredients
Instructions
Notes
All the ingredient amounts are approximate. If you go exactly by the recipe you'll have enough for a large cookie sheet's worth of nachos but if you have all the fixings you can just play it by ear.
3.4.3177