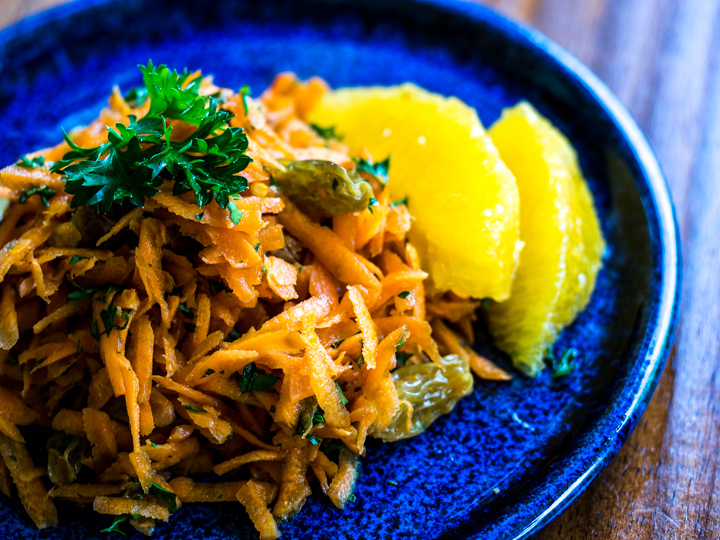 Carrot Vinaigrette Salad is my version of that cafeteria staple – carrot and raisin salad. Carrot and raisin salad is served nationwide, not just in the south, and in all those places it’s served in pretty much the same style – grated carrot and  black raisins bound with a little mayonnaise. Unfortunately the mayo tends to get runny at warp speed and unless you’re the sort of person who just likes raw carrots it’s a little bland and cloying. How to fix that?

I wanted something that was healthy, tasty, and would survive a few days in the fridge. Enter new & improved Carrot Vinaigrette Salad.

So I started experimenting with different methods of preparation. Each version had less and less mayo until I finally jettisoned it altogether. That took care of the watery milky residue at the bottom of the bowl. It remained only to punch up the flavor of the two main ingredients. This is accomplished by mixing up a fruit-flavored vinaigrette seasoned with red pepper flakes and lots of orange zest. If you add enough zest it almost tastes like candy and you still have all the nice slices of orange to add to the side. The parsley contributes more flavor than you might imagine, and best of all, the vinaigrette keeps the carrots fresh and the raisins plump.

It Keeps for several days

And yes, it lasts for several days in the fridge and yes, there’s a good chance that family members who don’t like salads or vegetables will like this so give it a try. You can enjoy it at supper or for a guilt-free midnight fridge raid. And try it as a side with a richer dish like Cider Braised Pork Loin.