Tired of those cornmeal hockey pucks they serve at the all you can eat catfish joints? Then look no further than this fritter. It’s a bite sized spoonful of corn souffle that’s been flash fried to outer crispness while retaining its pillow soft interior. It’s one of those have to have treats while the fresh corn is still on offer at the road side stands.

And one last tip. Barricade access to the fry pan or these may not make it to the dinner table since they have a tendency to be picked off at the point of origin.

So – just dice the ingredients: Mix them up, fold in the soft egg whites: Print
Corn Fritters
Author: Carine Clary
Cuisine: Southern
Serves: 4
Ingredients
Instructions
Notes
Since the frying time is short, make sure the dice is quite small so it will fully cook.
3.2.2708 A Vietnamese style cucumber salad that looks elegant and tastes really good. For some reason I’ve found that the dressing tastes better after it’s had a chance to set a spell, so if you have the time you should make it a day ahead or at least a couple of hours ahead but don’t add it to the cucs till you are ready to serve.

One of the ingredients called for is “fish sauce.” There are dozens of fish sauce makers and its pedigree goes back to the Romans who called it “liquamen” and put it on everything.

Generally speaking it’s fermented essence of anchovy or other small fish like sardines and you can use it in a pinch for non Asian recipes calling for anchovies. Everyone has their favorite – mine is Red Boat. When I started looking into different fish sauces I came across endorsements for other brands along the lines of, “smells like gym socks but once it’s in the finished sauce it tastes fine,” or “smells like Dad’s pits after he’s mowed the lawn but it’s ok in the final product.” Really? Gym socks and armpits? For your first course? Don’t think so… Look, we all know that these types of things may taste too intense if you’re sampling them out of the bottle but they should still taste good. I took a chance on Red Boat and when I got it home I poured some out into the palm of my hand and yessiree Bob, it tasted delicious straight up.

The company was started by an American, Cuong Pham, a former tech executive, and it has only two ingredients, black anchovies and salt. This is fermented for a year and then strained, bottled, and delivered for your dining pleasure. I even cheated and used it in my Ragu Bolognese when I ran out of anchovies, and it worked well. And how corporate of Mr. Pham to have given us a multi tasking version of fish sauce. You can feel that vibe (but in  a good way)!

Finally, if you’re addicted to take out spring rolls this doubles as a first rate dipping sauce. You can can make some up and keep a bottle in the fridge in case they forget to pack it when you pick up your food. Hog butchering and pumpkin picking both happen in autumn and what better way to celebrate great ingredients than combining them in an andouille stuffed pumpkin.

I’ve made this every fall for years and have tried all kinds of stuffings but these are the ingredients that seem to accent the pumpkin with true Louisiana flavors. And there are only ingredients – no measurements – since the amount of the stuffing will depend on the size of the pumpkin. So the first order of the day is to get a compact little pumpkin, in this case about three pounds, which should yield approximately four slices and then some tart fall apples and herbs for the stuffing. The first order of business is to cut a hole in the top big enough to extract the seeds and attached strings. And don’t toss the seeds. You can save and toast them for snacking.

Now slice the andouille into rounds and saute till they start to color up. Remove and blot the rendered fat. Then cut them into quarters and dump them into a big bowl and add to taste celery, garlic, bell pepper and onion that has been sauteed in some butter. When you’re dicing the celery use the leaves if you have them since they are packed with flavor. Next add the croutons, diced apple, and the thyme and finally some salt, pepper, dash of cayenne, and a little grated nutmeg to the heavy cream and pour it into the pumpkin till it comes up almost to the top. You want to leave some space up there since the croutons will expand a bit in cooking.

The amounts of onion, celery, and garlic vary according to the size of the pumpkin, but for this three pounder I used about a heaping tablespoon of each. Put it in a 350 degree oven and started checking it at the hour and a half mark. Depending on how firm you like the pumpkin you might want to remove it then or let it go another thirty minutes or so. Just keep checking by lightly pressing the outside or by seeing if you can pierce it with a fork. If you’re serving it by itself you might want to put it in a bowl as I did below and attack it with a spoon. It keeps all the delicious stuffing on top preventing your less health conscious family members from noticing that they’re eating something that’s really good for them!

The last piece….R.I.P…..(and you can see some of the toasted pumpkin seeds made a nice garnish for the leftovers.) Print
Andouille Stuffed Pumpkin
Author: Carine Clary
Cuisine: Cajun
Ingredients
Instructions
Notes
A good alternative to the sausage rounds is to use loose sausage or remove the sausage from its casing, crumble it and saute.
Use croutons made from dense breads that have been well toasted, Pepperidge Farm loose or cubed stuffing is good. If you're using your homemade croutons don't use ones made from a soft white or egg bread as they will go slimy on you.
An alternative filling would be substituting slightly under cooked rice for the croutons.
You can use fresh or dried thyme just remember that it's powerful so don't use too much.
If you decide to use the seeds you'll notice that they're covered with slimy strings. To destring and deslime them just rinse them in a pan then dump them in a salad spinner and they will be ready to toast in a pan on the stove or in the oven.
3.2.2708 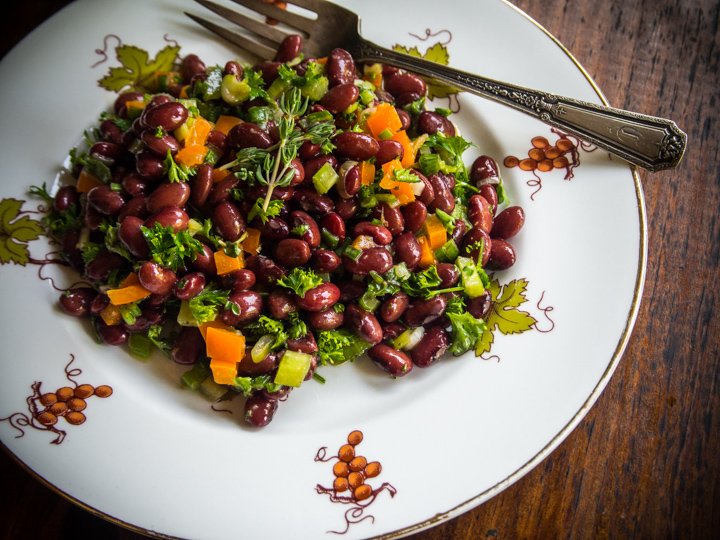 It’s still hot, you don’t want to cook, you probably don’t even want to read – especially not about cooking so we’ll make it short here. In three words: Red Bean Salad.

Three bean salad was all the rage back in the fifties. It powered through the decades and even now shows up at pot lucks and church suppers. And why? Because it’s good and easy. Open cans, throw in some seasonings and oil and you’re good to go. And it also keeps in the fridge for more healthy than Doritos late nite snacking.

This is the Louisiana One Bean Salad version using Louisiana’s favorite bean. I specify cans here but you can cook your own beans and the best way to do that in hot weather is to pre-soak them and then do a quick boil or even quicker prep in a pressure cooker. And don’t forget to add a tablespoon of oil to the water as it will keep the foam created by the beans to a minimum. If you go the canned route you’ll probably use Bush’s or Blue Runner. If so, drain them because you’ll be making the dressing and you don’t want it to be diluted or cloudy. 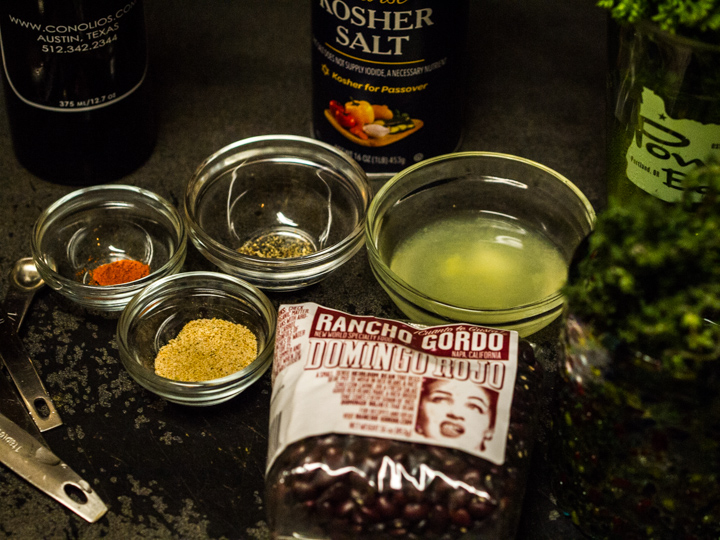 As you can see from the photo above I went the dried bean route and even used Rancho Gordo’s red bean for a change. It’s a smaller less creamy version of the classic Camellia Red Bean (as featured below). They’re both good so try them both! 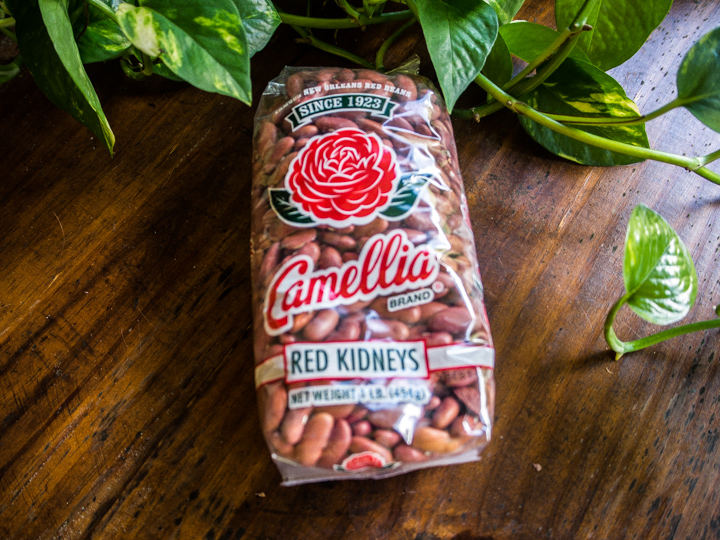 For the seasonings I like to keep it simple but the thyme is a classic Louisiana herb and adding it fresh really puts the flavor over the top. The dressing has lemon juice instead of vinegar but if lemons are in short supply use whatcha got! If it’s white vinegar go for it.