Veal Cutlets with Crabmeat Cream Sauce, aka Wiener Schnitzel Louisiana style, are usually referred to in New Orleans as “Panéed Veal,” which means breaded and pan fried. It can be veal scallopine or the cutlets I used here, but the important thing is to get a crisp crust.

This version is based on the one we used to have at the late great German restaurant Kolb’s. This is Schnitzel with a Gulf Coast twist. You take a savory slice of veal, fry it to perfection, then cover it with vermouth and sage scented sauce studded with lump crabmeat. It’s plain and fancy at the same time.

If you’re looking for the most traditional and elegant presentation you’ll want to go with the scallopine, but at about half the price the cutlets are a good option. If you do get the cutlets keep in mind that some butchers can cut them pretty thick. For this dish, you are much better off with a thinner version no more than half an inch thick.

Be sure and dry off the veal and then you’ll do the breading. First, you season the veal then dip in beaten egg then the flour. Quick fry in oil and drain.

For the sauce you’ll want to make a roux as described below then add the onion, sage, bay leaf, broth and heavy cream. Carefully place the lumps of crabmeat in the sauce to warm and pour over the cutlet.

And for Desert try

A classic German Apple Cake which is easy to make and very delicious. 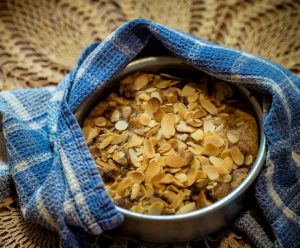 Veal Cutlets with Crabmeat Cream Sauce
Print
Author: Carine Clary
Cuisine: German
Serves: 4
Ingredients
Instructions
Notes
About the broth for the sauce. Just know that the better the broth, the better the sauce, and homemade is best. I make large amounts and freeze them in small containers for recipes like this. That said I use Swanson's Chicken broth all the time so just do the best you can.
3.4.3177
« Creole Eggs Cocotte
Peaches & Cream Pie »