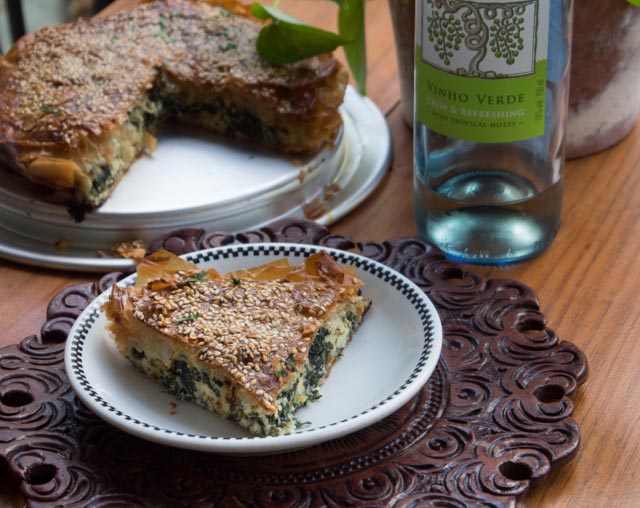 Spanakopita with its flaky sesame crust and savory spinach and feta filling fills that almost empty slot containing craveable vegetarian entrées. It’s a type of Greek pita or pastry, which is related to all the flat breads from Athens to the Ganges. Spanakopita takes it an extra mile making the pastry paper thin and crispy and it will serve equally well as an appetizer (or mezze) or a light main course. And not to be forgotten it’s perfect for those who observe Lent.

The basic concept of light pastry enclosing a savory filling is the foundation, but the filling is all up to the cook. Tradition calls for spinach, onion, dill, and feta but history tells us that many fillings were used depending upon time of year and preference. The onion can be anything from green onions, to shallots, to yellow. The cheese is usually feta but can be kefalotiri if you can source it. The greens can be any kind of spinach with additions of chard, basil, parsley and mint. Someday I’m going to include my favorite bitter bite – capers – into the mix but the real idea here is to play with the flavors till you find your favorite.

Greeks have eaten some form of these pies since forever and it’s one of the country’s best known dishes. You can find it wherever there are Greeks to prepare it but the default use of spinach, spinacia oleracea, was imported from Persia and is now dominant because local farmers find it easy to cultivate.

Another traditional variation is the Lenten version called “nistisimo” which has no eggs or dairy. My version only has an egg wash on the top so depending on your level of orthodoxy it could be considered lent friendly.

First off you get the filo dough out of the freezer and let it thaw. Once thawed open the package and roll out gently placing a damp towel over it. 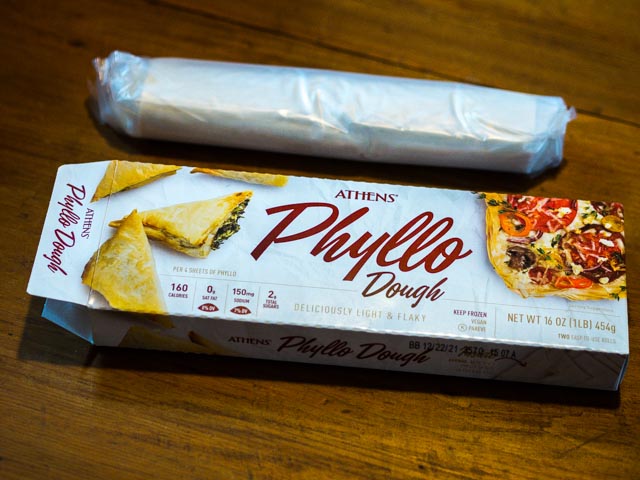 Next up is the spinach and there are generally three kinds. The type I’ve used here is the robust curly variety. This type needs to have the stems removed. You can see below how much is cut out and it really improves the texture. This is why using fresh spinach will always be better than frozen because the jolly green giant’s fingers are too fat to cut out all the ribs. Ribs bad (unless you’re at a rib joint somewhere in central Texas). Consistency all wrong and similar to cattle fodder. 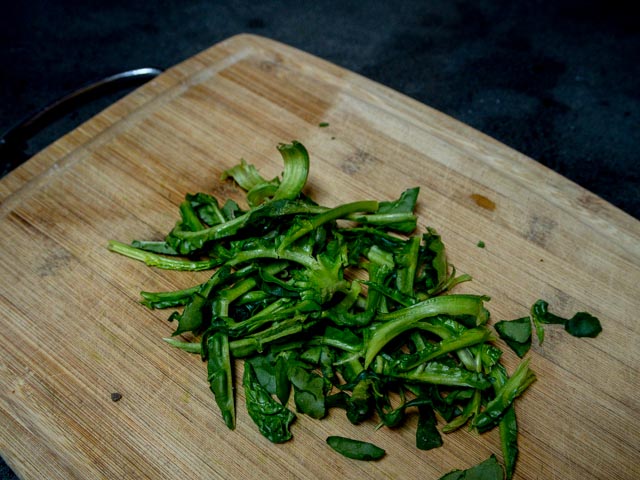 If you don’t have time for that you can buy plastic bags or containers of pre-washed flat-leafed spinach. The last option is the previously mentioned brick package of frozen spinach. This has the advantage of being pre-washed and pre-chopped, the disadvantage being that all the tough stems have been ground up and included. It will taste ok but you will notice the difference in taste and texture from the first two options. If time’s of the essence go with the bagged fresh version. The amount of spinach I call for is four cups which is approximately what is in every fresh bunch or bagged version. I don’t really ever measure.

Once you’ve deribbed the veg drop it in some boiling water for just a minute. 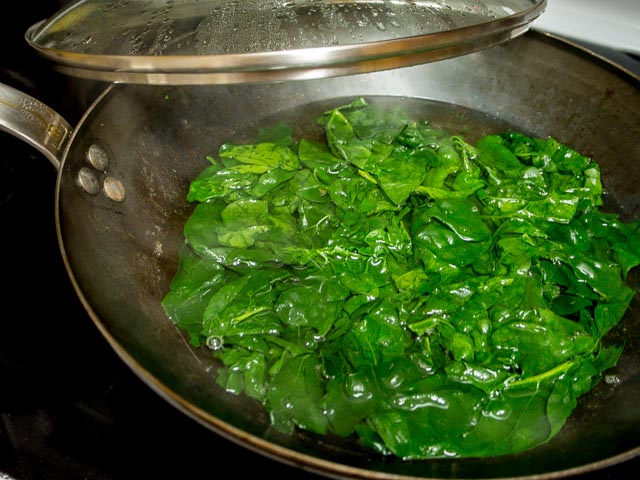 Then put into a strainer or cloth and squeeze out the water. 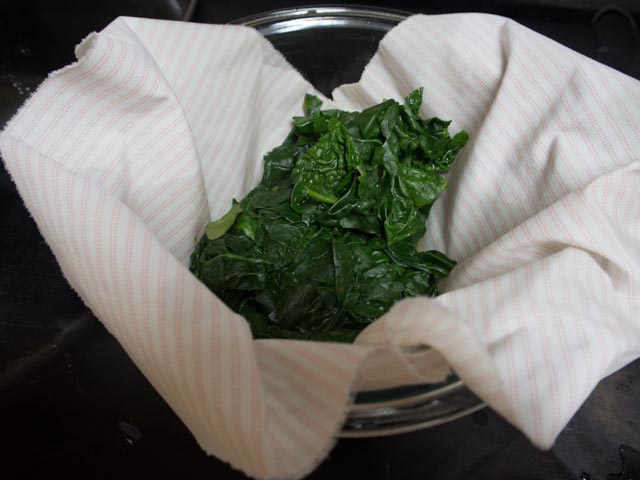 One thing you’ll notice in other recipes is the addition of uncooked spinach to the filling. I don’t do this because spinach has a lot of water which will leach out and make the filo layers soggy. You can see below how much I squeezed out of a bunch that was blanched & drained. 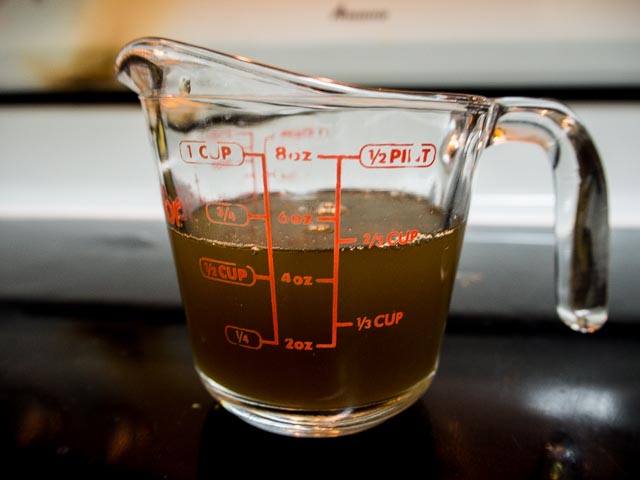 Next mix the spinach, basil, dill, onion, feta, ricotta and lemon zest well and set aside.

The final lap consists of assembly. Brush the pan lightly with oil and start peeling off the layers of phyllo and laying them down. It’s nice to get them in in one piece but absolutely not vital. Torn pieces will bake up just as well. In this prep, I used a springform cheesecake pan since it looks a little nicer for presentational purposes but you can use a brownie pan as well. 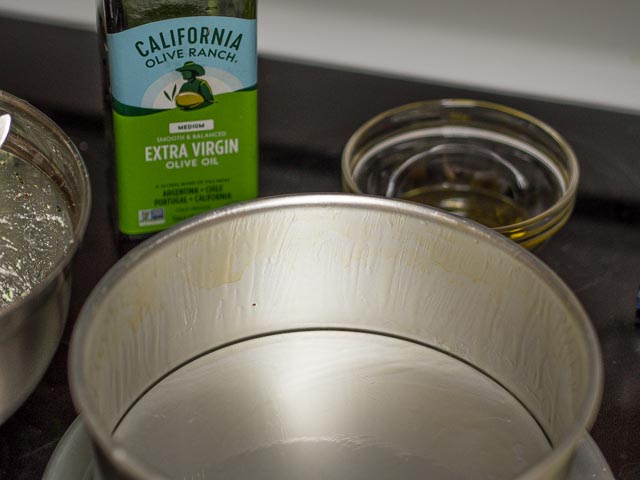 Once greased lay in about four to six layers of phyllo dripping a little olive oil over each layer and draping some over the edge. 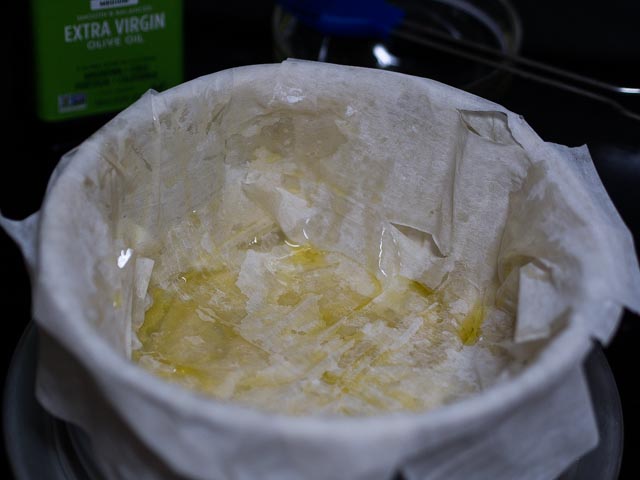 Now time to spread out the filling. 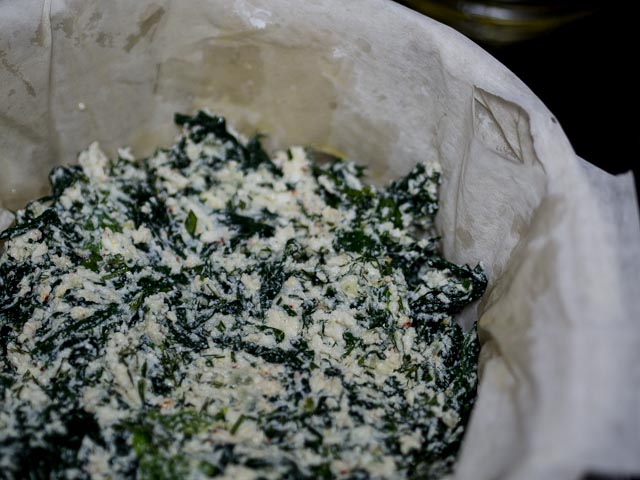 Once done add several separate layers of phyllo that you’ve gently crumpled like tissue paper then carefully fold over the layers hanging over the edge always sprinkling with the oil. When they’re all folded over drizzle with the egg/oil wash, sprinkle with sesame seeds and cook till brown.

p.s. Below you’ll see it in the old brownie pan. Perfect for cutting out squares as appetizers. 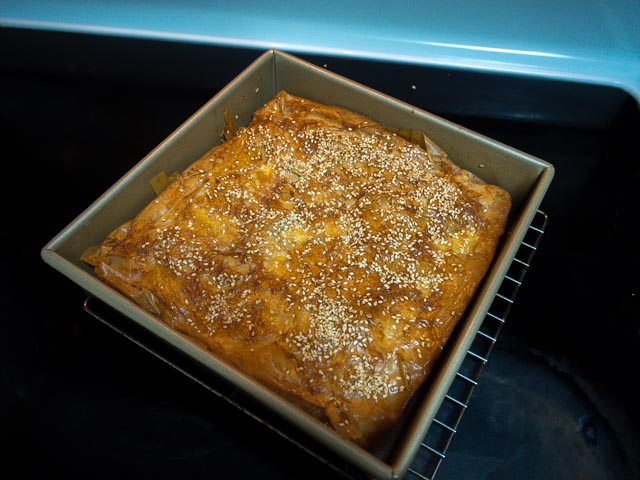 And as the Greeks say, “Kali oreksi!”

Spanakopita
Print
Author: Carine Clary
Cuisine: Greek
Ingredients
Instructions
Notes
*Vegetarians who avoid cheese may use cubed tofu. As for the feta get the kind that comes in a chunk in water not the pre crumbled type which is too dry.
3.4.3177