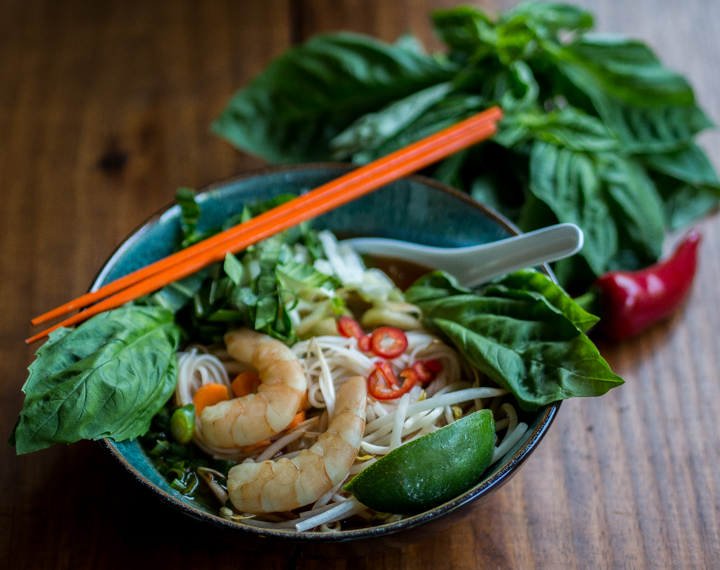 Most people know Shrimp Pho as the less famous sibling of the ubiquitous Beef Pho. But given the large amounts of shrimp stock lurking in local deep freezes and the ready availability of fresh shrimp it seems like it’s now time to let the star anise shine over a great soup!

For a city with traditionally scant offerings of Asian food the arrival of Vietnamese immigrants in the 1970s was a culinary godsend. After the fall of Saigon in 1975 Catholic Charities and the New Orleans diocese spearheaded a resettlement effort that concentrated this new immigrant group in the suburb called New Orleans East, originally in the Versailles Arms apartment complex. From there it grew to include a community that branched out into all the professions and small businesses but with a concentration in food and fishing. After all, those doctors, lawyers and sys admins had to eat somewhere and places like the Dong Phuong Restaurant and Bakery were there to cater to their needs. That, along with the Vietnamese Farmer’s Market where all the ingredients can be found, and you have no excuse for denying yourself the pleasures to be found in this complexly flavored cuisine.

Pho Hai San, or Shrimp Pho, is one of the many fish soup varieties that were developed in Vietnam.

Like our Louisiana shrimp stock, Canh Chua Ca, or Sour Fish Soup, is made with fat and collagen rich fish heads. Both taste great but the shrimp stock has that unmistakable brilliant orange color (as you can see below) and a flavor to match. Making a pho has its parallels to making a gumbo. You start with a core prep method and then riff on the veg and spices. You might use local bird’s eye peppers, dried pepper flakes, Thai peppers or habaneros. If you can’t source bean sprouts try sunflower seed sprouts.

Bok Choy or Savoy cabbage? It’s your choice but do get a feel for how you like your pho to be seasoned. Go easy on the cinnamon and cloves if you haven’t made it before and taste along the way to make sure it’s not too bland or too intense. Although it’s not listed as part of this recipe I’ve often used lemongrass and if you like that flavor it complements the shrimp. Last but not least I have to say that the two most important elements in this soup are homemade stock and roasted spices. The spices only take a few minutes to heat and as I’ve said elsewhere the stock is easy if it’s made ahead and defrosted.

As you can see from the close up below it’s a soup and salad bowl all in one so bon appetit and dig in! Shrimp Pho
Print
Author: Carine Clary
Cuisine: Vietnamese
Ingredients
Instructions
Notes
Cooked rice noodles can get sticky pretty quickly after they're drained. If you're having a hard time getting them into the bowl just run some warm water over them and they will loosen up.
3.3.3070
« Orange Arugula Salad
Lincoln Parish Peach Ice Cream »