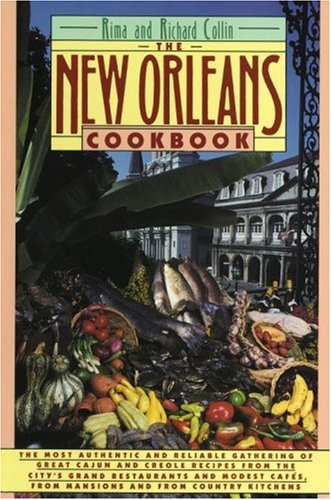 by Rima and Richard Collin

I remember my mother getting The New Orleans Cookbook by Rima and Richard Collin back in the 70’s. The first time I flipped through it I got to the end and checked the authors’ CV and had an instantly snobbish reaction. Coupla Yankees. What do they know?

Well, as it turned out, quite a lot. More than most of the natives in fact. Over the years as I began to cook more and more I kept coming back to R and R Collin’s cookbook until finally I jettisoned most of the rest. Besides, Richard Collin was also the ultra hip author of the Underground Gourmet and I’m pretty sure that our family would never have ended up dining at The Enraged Chicken without his recommendation.

What these guys really knew how to do was write and test recipes, and what’s just as important is that they were able to survey the large corpus of Louisiana cooking and present traditional recipes that people will actually prepare and eat. Other local cookbooks may have much of this but they are clogged with duds like “Ice Box Wafers with Oleo” and “Danish Coffee.”  Ever had those? Ever wanted them? Yeah, me neither. And if you’re having an intense craving for “Mock Oyster Dip” where the oysters are portrayed by frozen broccoli and canned cream of mushroom soup, well, you’re in business. Maybe you can eat it off the Ice Box Wafers with Oleo. Just don’t forget to include a Pepto Bismol chaser.

The problem with cookbooks generated by clubs and schools is two fold. First of all they are usually issued as a fund raising effort. This may constitute a worthy goal, but is not consistent with good food due to a lack of focus and expertise. Second, they’re like a culinary version of a spare room. Everyone’s junk is crammed in so tight you can’t find anything. And there’s lots and lots of junk. If too many cooks spoil the broth, too many cookbook contributors will destroy the consistency of the vision behind it. These cookbooks should have names like, “Great Louisiana Food” along with Mrs. Battleax’s Pu Pu Platter recipe from when her husband, General Battleax, was stationed in Hawaii. Or Muffy the socialite’s gag inducing tribute to her family cook’s version of whatever.

All this is absent from The New Orleans Cookbook. What they do have is exactly what you need. Several versions of gumbo, shrimp stew, etoufée everything, even game and sausage preparations. The chapter introductions are witty and informative without being prolix. The illustrations are a wonderful record of how much has changed and how much has not.

And most touchingly it is said that after Katrina there was a huge surge in sales of this book. What more can you say when you know that this was one of the first things people wanted to replace after coming home?

The New Orleans Cookbook by Rima and Richard Collin: https://www.amazon.com/New-Orleans-Cookbook-Rima-Collin/dp/0394752759