What comes to mind when you hear the words ‘New Mexico?’ Kokopelli? A brilliant crimson ristra? Yes and Yes? Now how about wine? Would you be surprised to know that New Mexico wineries date back to the founding of the territory in the 17th century? In fact they’re the oldest in the country and were founded by Franciscans who grew grapes to ferment for communion wine. With this tradition of wine production New Mexican wines went from strength to strength until the U. S. government applied the brakes during Prohibition. Although a few growers survived until 1933 when Prohibition was repealed the industry took an almost fatal hit losing most of its acreage in the 1943 Rio Grande flood. Jump forward to the 21st century and wine is back in a big way.

By the 1970s adventurous growers were starting up again. From Truth or Consequences in the south to the foothills of the Rockies in Taos, grapevines and wineries began to blossom (or more accurately, fruit). Add a slew of craft distilleries and you have a full service alcohol industry.

Having been a regular NM visitor since childhood the closest I ever came to enjoying fermented beverages was the roadside stands we’d pass selling local fruit ciders from the summer harvests. When you’re a kid eating the green chili burgers at the Bobcat Bite wine pairings are not part of the picture. But as time passes and taste buds develop we all start to crave the subtle flavors that can best compliment the local food and this is something that New Mexico wineries are achieving at a rapid pace.

So in an attempt to bring everything up to date a friend and I set out to visit two local wineries and one craft distiller.

First stop was just north of Santa Fe at the Estrella del Norte vinyard. Sitting down with the owners Eileen and Richard Reinders we discussed the challenges and rewards of producing their array of award winning wines. The vines are original to the estate and the dry climate generally eliminates the need to spray for insects or mildew so you can check the box on organic for these. 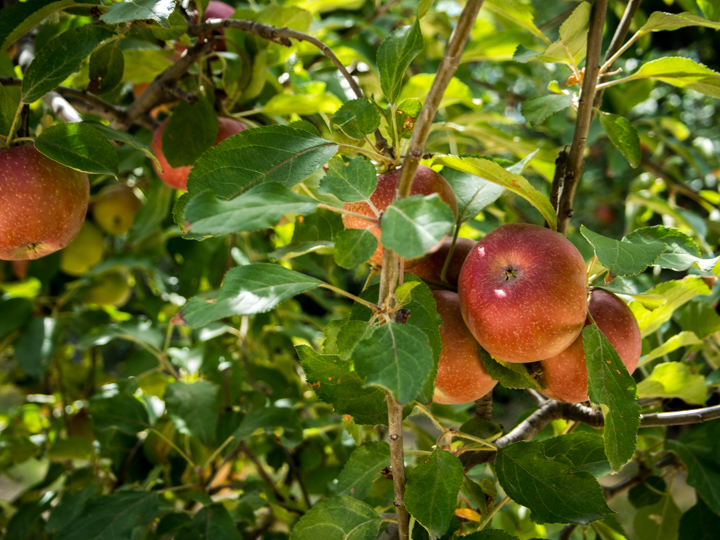 Estrella Del Norte now produces more than 25 different wines, everything from blended table wines to pinot noirs and  wines made from the property’s apple and pear orchards. They’ve learned to adapt to the high altitude and harvest early to avoid the early frosts. To speed the ripening they’ve developed canopy management which means thinning the leaves, getting everything in between the wires so the fruit gets more sunlight. “Our pinot noir that’s from this property won a gold medal in an international competition” says Richard Reinders. And it tastes like a distinctly New Mexico pinot not like an Oregon pinot which is down to the different soils.” 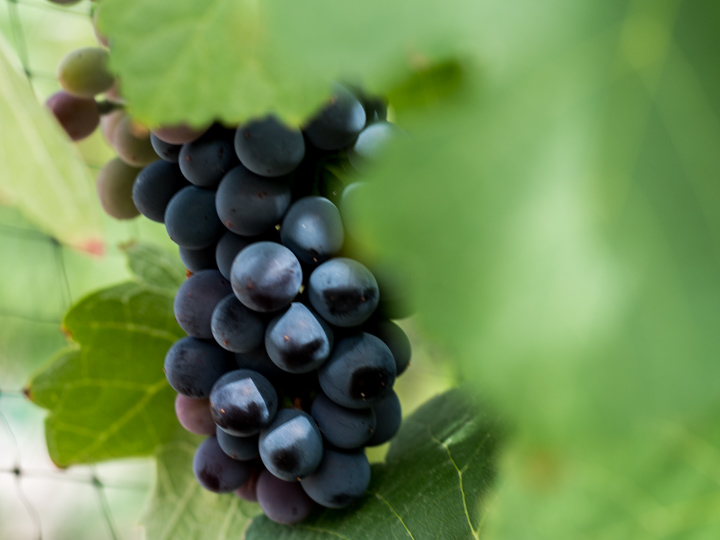 Hitting the road north brought us to Black Mesa Winery in Velarde. Sporting some delicious reds this tiny vineyard not only has a feline CEO named Sola but for the anthropologically minded, petroglyphs on the property. After you tour the facility and taste the wine you can sit out front and enjoy watching the largest swarm of hummingbirds I’ve ever seen. 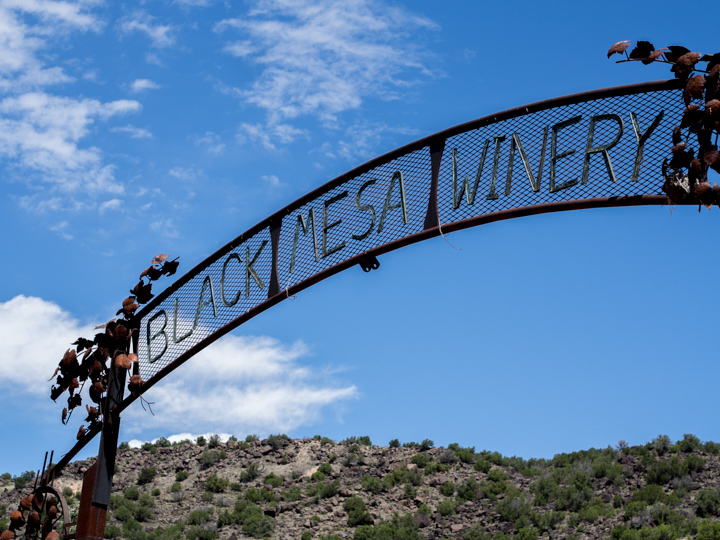 Black Mesa grows six grape varietals and each year buys select grapes from other New Mexico growers throughout the state. Their wine production starts with de-stemming the grapes and sorting the grapes by hand. After sorting, the grapes are put in the crusher. The juice is then fermented into wine in small,100 gallon totes (or batches). The grapes get the now rare hand punching technique, two to three times each day, to break up the grape skins. Hand-punching gently extracts both the color and flavor from grapes, and the difference is both visible & tastable. 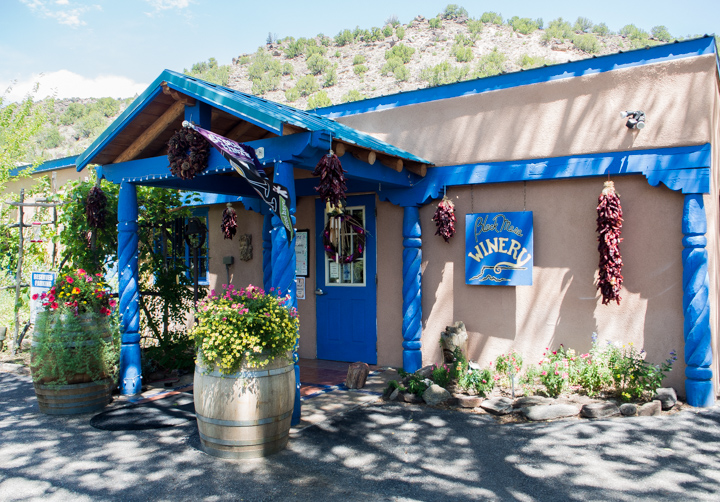 They make everything here from Cabernets to Montepulciano with Whites and Roses as well. Mexican food lovers won’t want to leave without a bottle of the Chocolate Caliente which is a blend of Ruby Cabernet and Baco Noir. It’s a sweet wine which has New Mexican red chile, cocoa and cherry flavors. Great with anything napped in a red chili sauce.

The final step in the booze trail was the intriguingly named KGB Spirits located north of Santa Fe in Alcalde, NM. Distilleries require more initial capital investment with their copper stills and long aging times so if you’re going to distill you’d better be sure you can produce a quaffable brew. 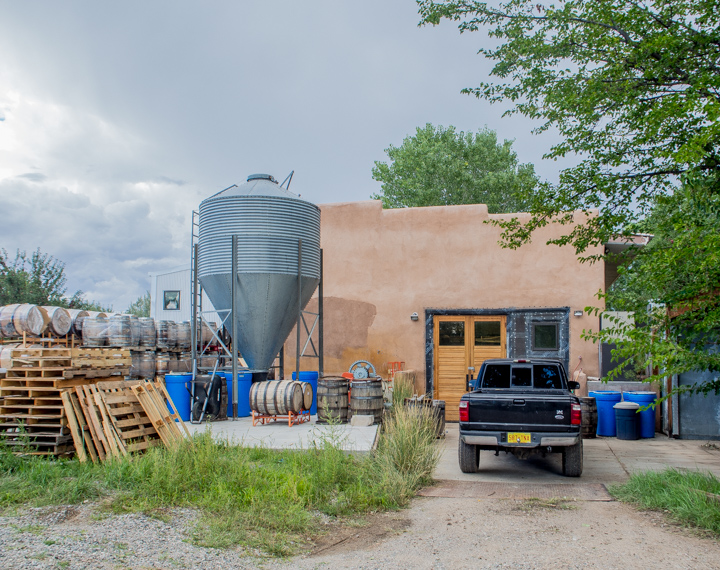 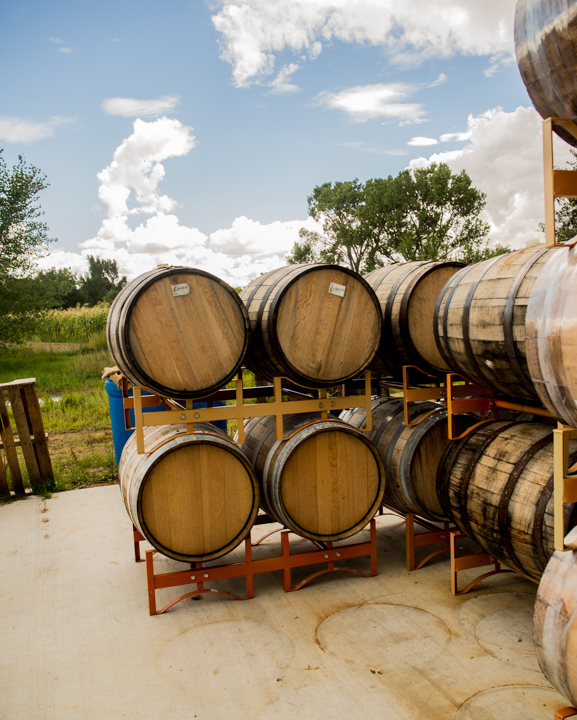 KGB does this beautifully with such offerings as Taos Lightining, Brimstone Absinthe, and Vodka Viracocha. The absinthe, like other digestifs (chartreuse or sambuca), tastes of anise, but has numerous other identifiable herbs in it. It’s not hallucinogenic. Just tasty and has a World Spirits Competition award to confirm it. Their spirits are being poured in bars all over New Mexico, Texas & the east coast. You can go to their website for a list of outlets that carry their excellent products! 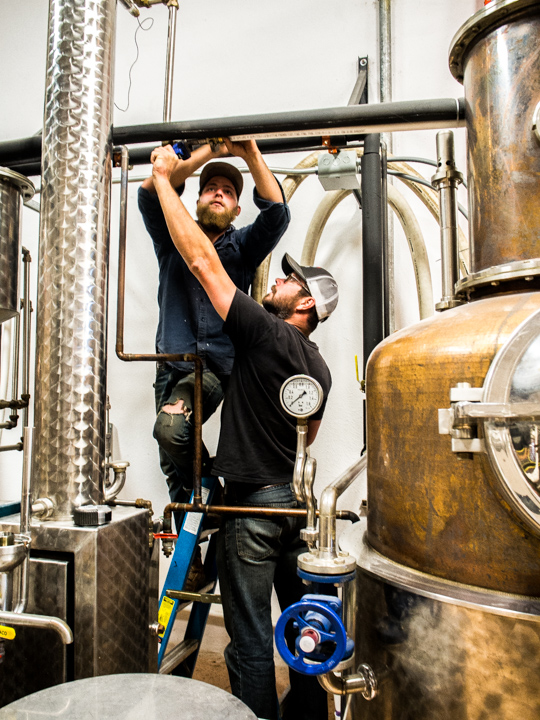 So treat yourself to a beautiful drive around beautiful northern New Mexico where you can buy and learn about wine and spirits. It’ll be the best shopping trip of your life.