Back in the eighties they made a TV movie about a post-apocalyptic world. They called it “The Day After” and anyone who’s surveyed their house, and especially their kitchen, the day after Thanksgiving has lived it. You think you’ll never eat again but by the next afternoon familiar hunger pangs kick in and you’re headed back to culinary ground zero to pick through the leftovers. Enter Turkey Poulette.

This is a variation on Poulet Parisienne, the chicken dish that is napped in a creamy sherry and mushroom spiked sauce. The Turkey Poulette we now enjoy was invented by the resourceful chefs at the Roosevelt Hotel in order to use up the buffet table turkeys and hams. Their version was a stacked open-faced sandwich consisting of bacon, ham, and turkey topped with a white sauce and cheddar then run under the broiler to brown the cheese.

It’s hot, creamy, and delicious and if you’re not using up your turkey in soup or pot pie it’s definitely the way to go. I leave the ham out of my recipe since we never have it for Thanksgiving and the bacon makes it somewhat redundant, but if you have it and like it, by all means, lay some on.

Start out with a slice of sourdough or artisan-style bread, top it with a couple of slices of bacon, put the turkey over that, then pour on the sauce and sprinkle the cheese over it all.

The sauce I have here calls for a little chicken or turkey broth along with the half and half making it more of a velouté than a bechamel. To me, that’s more complex and the teaspoon of vermouth makes it even better. If you don’t have vermouth try the sherry or some leftover white wine, or as a last resort, just tip a shot of your martini into the brew while it’s thickening. (Actually, I’ve always thought that Turkey Poulette would make great drunk food if you’re sober enough to prepare it…)

Once assembled I like to put the cookie sheet holding the slices fairly close to the broiler so the cheese will bubble up and brown quickly without causing the sauce to run off the edges. Not that extra sauce is ever bad but the presentation (and consumption) is neater when it’s not swimming in liquid.

Mushrooms on the Side

And although many versions of Turkey Poulette have mushrooms in the sauce here they’re served as a side. That’s for two reasons. One is that many people have strong negative feelings about the humble shroom…..and secondly when they appear in a sauce they cook up kinda gray and rubbery. Cooking them separately allows you to get a nice caramelized brown to both the shallots and the mushrooms.

And since we’re dealing with leftover turkey here you’ll hopefully have for a side some Cranberry Orange Relish Sauce. 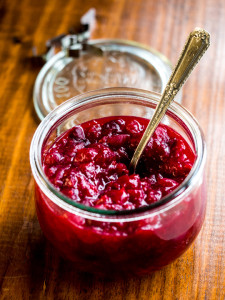 So make your sauce, assemble, broil, and enjoy!