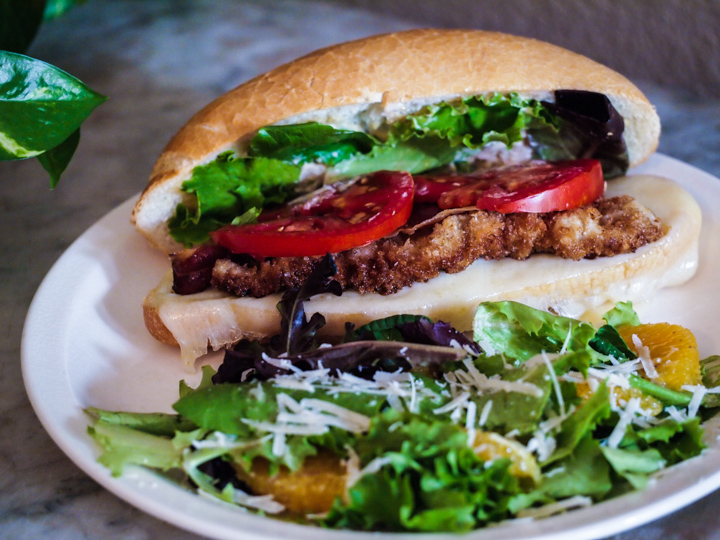 Back in pre World War II days it was actually possible to find restaurants in New Orleans which served something called the Mussolini Sandwich.

It is true and I have the ad to prove it.

I thought it would be fun to recreate but needless to say there is no record anywhere that I can find outlining the ingredients for the “Mussolini.” No one is owning this orphan. I just remember my father telling me that my grandfather used to get them on business trips to New Orleans and that we (as in our family) had a special connection to the Mussolinis.

It seems that Il Duce’s penultimate resting place was the awning of a Milan Esso station from which he and his mistress Clara dangled following their execution by partisans. Since my father was employed by Exxon (which is Esso in Europe) we therefore had our very own connection to the infamous founder of fascism. I’m going to pass on providing an illustration of the post execution display but you can check Google images and it’ll pop right up.

But on to the sandwich.

I figured that since there was no record, or that the record was “missing,” the best way to memorialize the man in the silver helmet was to make something out of ingredients traditional to his home state of Emilia-Romagna.  Researching the subject I found to my great surprise that Mrs. Mussolini, like all survivors, had assessed her situation (limited pension benefits for widows of executed tyrants) and had just gotten on with life and making a living. In her case this involved, can you believe it, opening a restaurant. I don’t have the menu but I think it’s safe to say that there were probably no special culinary tributes to her late cheatin’ spouse.

However, I decided that since prosciutto, parmesan, and balsamic vinegar featured prominently in the local cuisine they could star in my sandwich. So what started out as click bait and a joke ended up being something delicious that I was surprisingly craving not a week after I “invented” it.

The recipe below is for one sandwich but can be multiplied endlessly, loaves and fishes style, for all your hungry and politically incorrect friends. Perfect for eating when yelling ‘Forza Italia!’ while you’re watching the world cup.

The first order of business is to get a nice piece of veal scallopini like this: 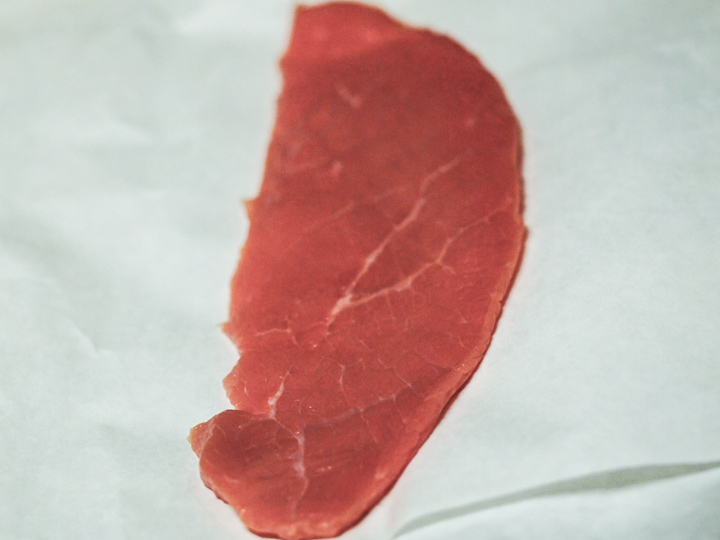 Salt and pepper it and dredge it in some flour, dip it in an egg wash, then dredge in seasoned bread crumbs or Panko. Gently press the piece of proscuitto onto the top and lay in the hot oil so that the side with the proscuitto is facing upwards like this: 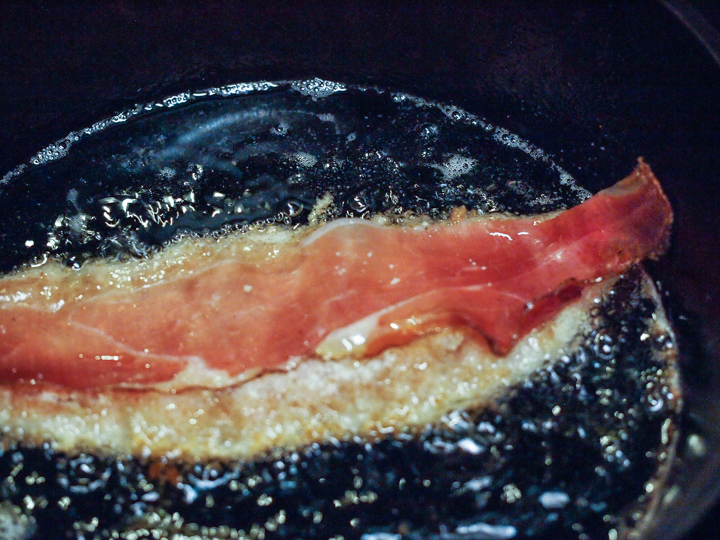 Most of the cooking will be done on the first side. When it’s brown carefully flip it. You should only need to cook the side with the proscuitto a minute or so. The proscuitto will be crispy by then and you should remove and drain. (If the proscuitto comes off during the flipping procedure – no problem. Just let it sizzle for a sec then lift it out. You can lay it out on the sandwich during assembly). While this was cooling, I toasted the bread, added a few drops of balsamic vinegar to the mayo, sliced the tomatoes and assembled.

Although the recipe specifies only “french bread” the best choice is french bread made by Germans in New Orleans, e.g., Leidenheimer’s. Very thin crust – very light interior. Almost like the kind of bread they use for Cuban pressed sandwiches. You can also use ciabatta bread. Really any kind works, it’s just that thinner crispier crusts show off best the crispy fried veal and prosciutto inside.

I added an orange arugula salad which is a great complement to the heavier fried veal.