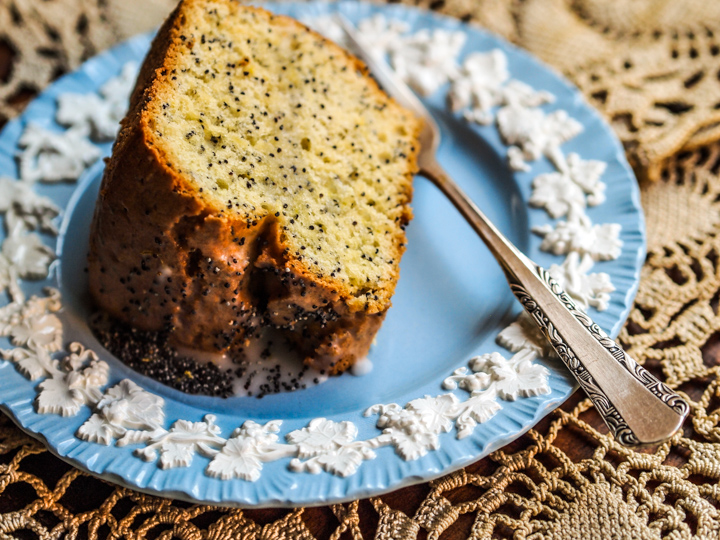 Everyone needs a reliable Poppy Seed Cake recipe in their culinary toolkit and this one is a good basic variation on the Maida Heatter version.

Nothing, however, can quite beat my first “Poppy Seed” cake. I only assisted in the preparation of this fraud but it provided a valuable lesson in exploring the limits of improvisation.

It was some family gathering – don’t remember the occasion – but people were multiplying at my grandmother’s house and food was rapidly running out. My aunt started to rattle through the cabinets looking for something, anything, that could be offered up to the hungry when she caught sight of a box of cake mix. “That’ll do,” she said. “Now go get some eggs and corn oil and we can get this stuff going.” By the time I got back to the mixer with the supplemental ingredients, my aunt had opened the cake mix.

“That stuff in the cake mix. It’s moving.”

“Yeah, but what is it, cause it kinda looks like weevils.”

“Well,” she said, “I believe you might be right about that.”

At that point, she took a long drag on her Kent and stared contemplatively at the bowl of suffocated weevil mix and declared, “I think we just need to go with it.”

She looked at me with pity. “No, Carine. Not bug cake. Poppy Seed Cake.”

“I’m not going to tell them anything and neither are you. They’ll just assume that it’s poppy seed cake and everything’ll be fine.”

At that point, she fired up the mixer, minced the orange slice that she’d removed from her Old Fashioned, dropped that in, then poured a couple of tablespoons of the actual drink into the churning insect vortex, and presto! Old Fashioned Poppy Seed Cake was born. Not even the maraschino cherry went to waste as it ended its life garnishing the top of the cake.

It was a great success. Everyone remarked on its “unusual flavor” (thank you Bourbon and Angostura bitters) although one of my uncles suggested that it “could do with more poppy seeds next time.”  My aunt just smiled and promised to remember.

So my takeaway from this experience is that the eatable and the entomological can happily co-exist – as long as nobody finds out.

The prep on this is pretty simple. Just focus on creaming the sugar and butter very well and then adding the egg yolks one at a time. The next step is mixing the flour with the leavening ingredients and adding one cup to the batter mixture. Then mix thoroughly the sour cream, poppy seeds, lemon juice, lemon zest, and flavorings and add to the batter.

Finally you will beat the egg whites until slightly foamy and add the remaining quarter cup of sugar beating to soft peaks. Once this is done fold into the batter and fill the pan baking until a toothpick comes out clean, about 55 minutes.

It’s delicious by itself or with a bowl of homemade vanilla ice cream so try it and enjoy!

Lemon Poppy Seed Cake
Print
Author: Carine Clary
Recipe type: Lemon Poppy Seed Cake
Cuisine: Southern
Serves: 8
Ingredients
Instructions
Notes
Beating this thoroughly at every step of the way is critical since much of the rise comes from the air you've beaten into the butter, eggs and sugar. The finished batter should be pretty light.

You can substitute full-fat yogurt for sour cream and cake flour for the all-purpose flour but the final product lighter and less dense.

Baking time will be less if you divide the batter between two loaf pans.

This is great alone or with vanilla ice cream. However, if you want a simple glaze get some powdered sugar and add vanilla and/or almond extract and a little lemon juice all to taste. You can also sprinkle a little extra poppy seed and lemon rind on top of the glaze.
3.4.3177