Intensely vanilla this is the standard never fail classic. The difference between now and years past is the ability to do this in a machine on your counter top. No more packing ice and salt into the outer rim of the freezer, no more dripping the fresh made cream onto the grass and having the dog lick it up and chase you for the dasher….although those were good times and good memories.

You start by heating the cream and sugar then whisk in the yolks and cook till it coats a spoon (or registers 180 on a thermometer). Draw your finger along the back of the spoon and if it creates a channel (as seen below) it’s done. Take the cooked mixture above and pour through the strainer into the remaining cream. This will strain out any curdled parts but for God’s sake don’t toss the bean! Rinse it off, let it dry and reuse it by putting it in the sugar bowl or dropping it in a bottle of cognac or bourbon where it will continue to perfume the contents. After the cook and the strain you’ll end up with a custard mixture which needs to be cooled down fast either in an ice bath (submerging the custard in a larger bowl packed with ice) or the lazy man’s way parked on a cold compress from the freezer as seen below. This is easier and less messy than the ice bath, so just pop it on, stir and blow for a couple of minutes then put it in the fridge and let it cool for a couple of hours or overnight. Now all that remains is to get the ice cream maker out, plug it in, pour it in and in another half and hour you’ll have your very own little artery clogging bowl full of heaven. Enjoy it with Orange Almond Crisps or some sliced fruit.

Vanilla Ice Cream
Print
Author: Carine Clary
Cuisine: Southern, Creole
Ingredients
Instructions
Notes
Do not try and cheat by skipping the bean. It will not taste the same. And it’s preferable to buy the bean from a spice merchant or a grocery store with a quick turnover, which will insure that the bean is fresh.
If the custard starts to boil, take it off the heat. And don’t worry. Straining it will eliminate the curdled parts.
3.2.2708 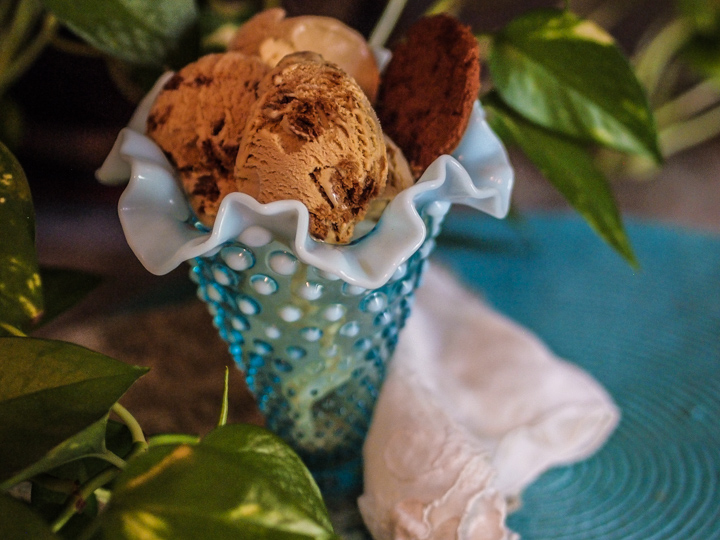 I invented Salted Steens Ice Cream one Christmas when I was running low on white sugar and high on cane syrup and it turned out to be the best possible way to use up Steens syrup. It’s nothing more than simple cane syrup ice cream studded with gingersnaps. You can make it at any time of year but it’s especially nice around the holidays since it tastes like gingerbread. The smoothness comes from the combination of the syrup and the cornstarch.

One of the reasons homemade ice cream tastes better than store-bought is the custard base. This adds a step to the process, not to mention the extra time and the expense of the egg yolks. Most commercial ice cream makers can’t charge enough to make a profit on custard-based versions so they don’t make them. This is the reason amateur ice cream makers usually churn out product that’s superior to the pros. Because they can afford to.

What stops many of them though is the near-universal fear of curdling. No one wants all their effort and expense to end up as a pot full of runny sugary scrambled eggs. But fear not! This problem can be largely avoided by the use of a thick bottomed pan and/or double boiler, moderate heat, and constant stirring. And the stirring time is mercifully short since the eggs do cook quickly. And last but not least there is the strainer. No matter how careful, no matter how low the heat, you will end up with a few curdled squiggles. That’s why you’ll pour it through a strainer. That way no one will ever know.

Making the Custard and freezing the ice cream

So for this recipe, you’ll want to start heating the cream, then in another bowl whisk vigorously the yolks, cornstarch, and syrup until completely smooth. When the cream warms to the point where it’s hot(ish) but still not too hot to stick your finger in, go ahead and ladle some of the cream into the egg yolk mixture. This is called tempering. I think of it as squiggle reduction because it will warm the yolks without cooking them and causing the scrambled egg effect. After you’ve added two or three more ladles of cream and mixed it well, pour the cream and yolk mixture back into the pot with the cream.

Stir until a thermometer reads 180 or until you see the first bubble pop on the surface. One fail-safe way of testing doneness is the old “coats a spoon” routine. When the custard starts to visibly thicken pull out your spoon. Does a thick layer adhere to the spoon? Yes? Now take your finger and run it down the back of the spoon right through the middle. If it creates a channel that stays you’re done. Think Moses. Parting of the waters. Like that.