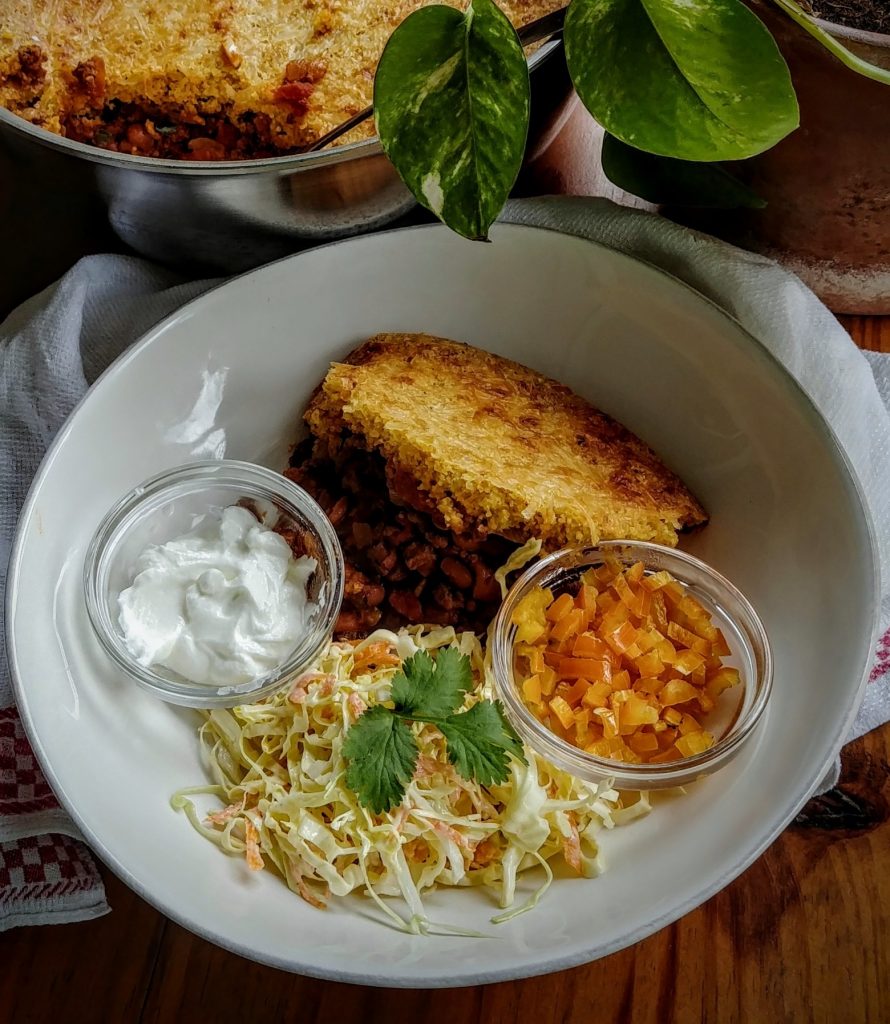 Chili Cornbread Casserole is the easy complete meal that can be cooked and served in the same pot. How sweet is that? Used to be politically incorrectly referred to as “brides casserole” due to its simplicity and utilization of canned goods, but who cares? Tastes great, kids like it, survives pretty well in refrigerator leftover land so let’s get started. 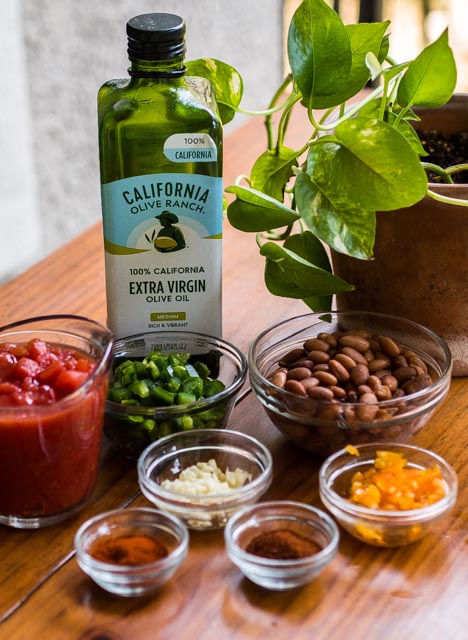 For starters, you’ll need some ground chuck. Put a little oil in the pan, break up the ground meat and thoroughly cook and set aside. Add a little more oil, dump in the onion & garlic and cook until clear, about three minutes. Next add the seasonings and the drained can of pinto beans. Lightly smash a few of the beans against the side of the pan. This will thicken the final chili. Add the diced tomato with its juices, the reserved meat, stir and let cook for a couple of minutes. If you’re a do ahead kinda guy or gal making this for tomorrow’s supper you can stop here and pop in the fridge. Otherwise, cut the heat and mix up the cornbread. 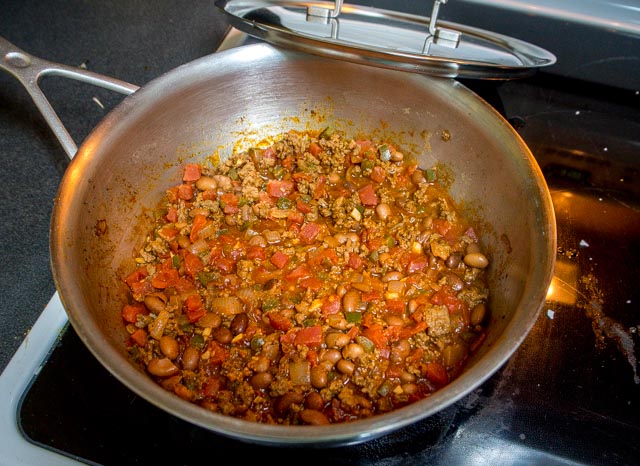 The cornbread is easy & when it’s mixed you can pour it over the chili which you will have flattened out, and note: I misspoke in the first paragraph. This meal dirties two dishes if you include the one you use to mix the cornbread but two’s not bad so just live with it 🙂 Shred the cheese of your choice on the top of the cornbread, slide in the oven, and your labor is over.

Below you’ll see it served with a little extra chopped bell pepper and some sour cream along with an ad hoc coleslaw that was nothing more than shredded cabbage and carrot with a little mayo.

Done! Now down the hatch. 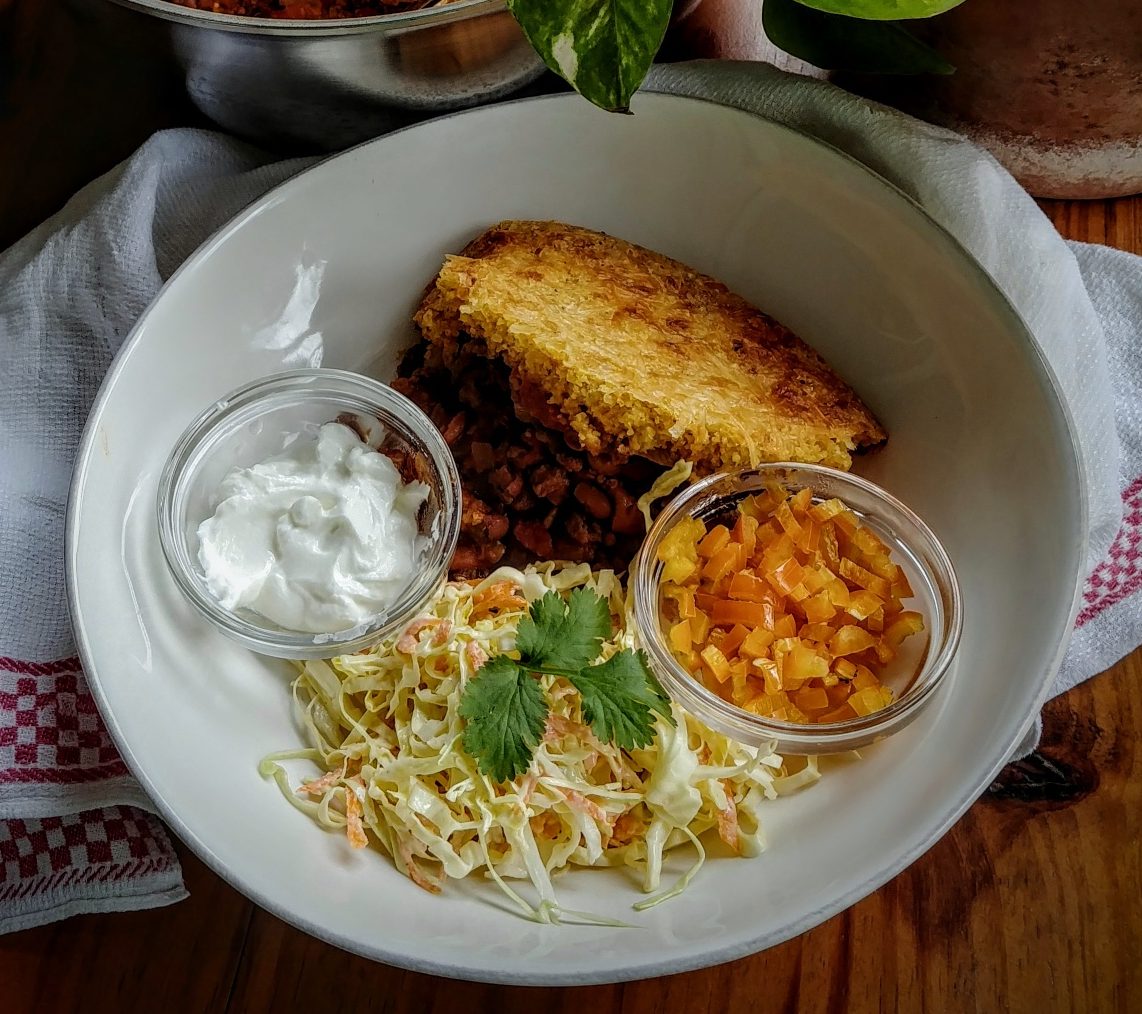 Sometimes the simple things turn out to be the most complex and so it is with cornbread. If you’re from the south you more than likely have numerous relatives who will repeat their cornbread recipe to you like it’s the Nicene Creed. I had one grandmother who was cracked on the subject of white flour in cornbread. As in, it didn’t belong and the people who used it were, and I quote, “No better than Yankees.”

Well. That’s clear enough then. The problem with the complete white flour proscription is the excessive grit factor. William Makepeace Thackeray put it best when he described his first (and probably last) experience with cornbread as akin to “biting into a pin cushion.” Apparently this occurred on a trip to New Orleans back in the 1850s, a trip that elicited fulgent praise for all local foods save this one.

My other grandmother’s recipe was similar to the first’s but for the fact that she took one small step down the slippery slope to cornbread hell by adding a meager tablespoon of flour to the mix. This was better but still a little gravely for my taste.

So I experimented and after endless pans of cornbread came up with this rejiggering of ingredients that include one quarter cup flour. One-third cup is too much, but a quarter smooths things out while leaving the cornbread acceptably coarse-textured. It has no sugar – that really would be a bridge too far and tastes nothing like those awful “corn muffins” they sell in New York diners.

As for the other ingredients you want full-fat buttermilk which Borden now sells as “Bulgarian” but whatever they’re calling it it’s thick like the old version they used to sell. If you can’t get it buy plain yogurt and thin it very slightly, however, buttermilk is by far the best. It should be just pourable. And as for the cornmeal it should be exactly that, meal, not flour, and the cornmeal should be medium or fine grind.

This cornbread is delicious plain but as you can see the version here has been doctored up somewhat by the addition of a cup of corn and a couple of tablespoons of minced onion and bell pepper respectively. The black specks are ground smoked ancho chilis which if you don’t have them you can substitute cayenne to taste. You can go to about a cup and a third of fixins and it will still fit in the nine-inch skillet. Just don’t forget to get that skillet smoking hot before you pour in the batter.

And if you pour it into hot chicken or duck fat you’ll feel like Tracy Morgan who said he loved his cornbread so much he wanted to take it out behind a middle school and get it pregnant. Uh huh. You know it. That’s this cornbread.

And if you like it – Combine it with Chili for a one-stop meal:

Cornbread
Print
Author: Carine Clary
Cuisine: Southern
Ingredients
Instructions
Notes
One excellent pan greaser is leftover duck fat. I have a glass jar of it in the freezer and it's good for many things, this being one of them. You may also use chicken fat, goose fat or bacon fat.

Another way to make it is Texas style with kernels from an ear of corn, a couple of tablespoons each of diced onion, hatch chilis and bell pepper.
3.4.3177