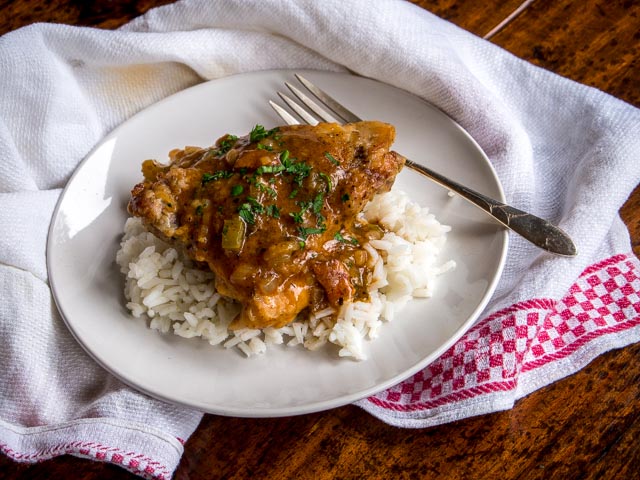 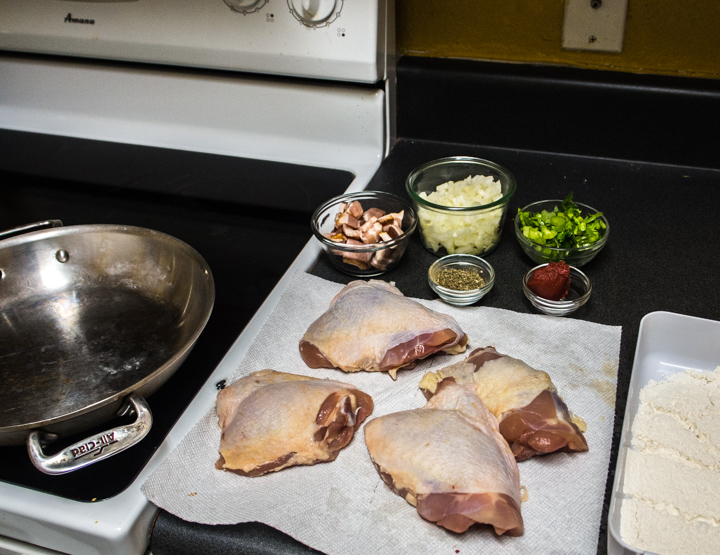 Next, add your onion and celery and saute for two or three minutes on medium heat until somewhat softened. Next stir in the tomato paste and herbs, then add back the chicken, bacon bits, and water. Cover and put in the oven for about half an hour or until it tests as tender. 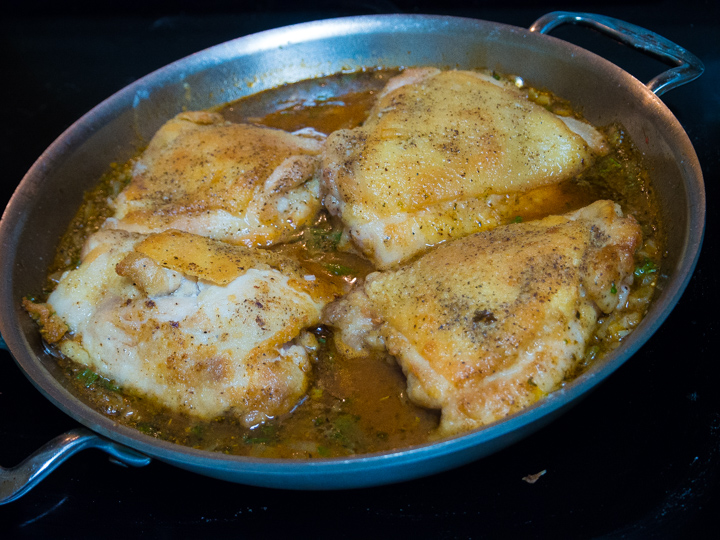 Arrange the chicken pieces on a platter that you’ve covered with hot rice. Now you will check the sauce for seasoning and add the vinegar. Once it’s perfect pour the gravy over the chicken, sprinkle with parsley or chives, and serve to your hungry tribe. 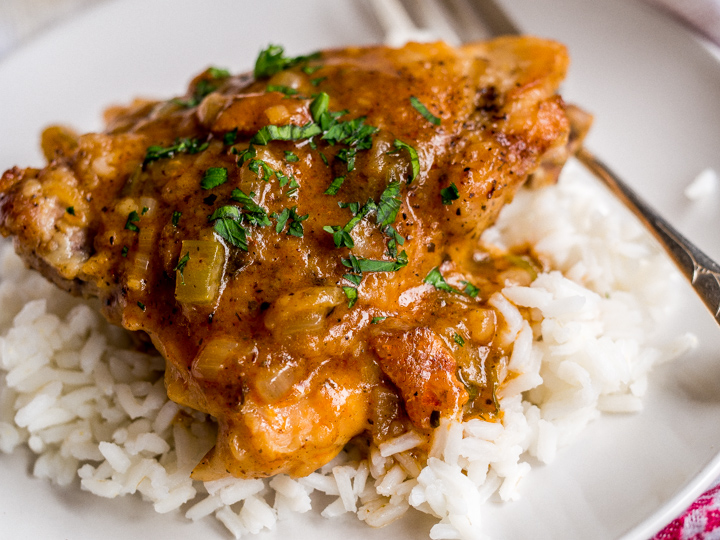 Side Dishes that pair well

For a dish this rich and unctuous you’ll do well pairing it with a light salad like Sensation Salad or Orange Arugula Salad.

Smothered Chicken
Print
Author: Carine Clary
Cuisine: Southern
Ingredients
Instructions
Notes
If you don't have any dried herbs several sprigs of thyme or marjoram will serve! Just drop them in before you put the chicken in the oven for the final cook.
3.4.3177 First question answered. Takko Chicken did not come to New Orleans on the slow boat from Tampico. Nothing at all to do with Mexico it’s completely Croatian. Croatians dominate the oyster business locally and own numerous  restaurants – many of them Italian since Croatia abuts the northeast corner of Italy and Croatians have mastered northeastern Italian cuisine. They’re famous for oyster recipes, the most famous being the New Orleans restaurant Drago’s charbroiled oysters which would be hands down my first choice for a death row meal. However, as I’m currently free I like to branch out and eat other things, this being one of them.

The recipe here has been adapted from the version used by the Kopanica family of New Orleans. It’s called Takko because Croatians in New Orleans are called Takkos. “Tak” in most Slavic languages means “so” and the greeting among the oldsters in the community was, “How ya doin’?” the response being “Tako Tako” (so so). They may have been doing “so so” but their chicken is doing much much better.

The concept here is a quick fry for color followed by a slow braise that infuses the chicken with the garlic and herbs and renders the meat fall off the bone tender. Prefrying the chicken to brown it and create flavor was a slam dunk for someone who once won a blue ribbon for fried chicken at a middle school cooking contest. For most people the usual difficulty in achieving perfect fried chicken is cooking the chicken to browness on the outside and doneness on the inside. That requires just the right temperature or you end up with crunchy crust over raw meat. Takko Chicken eliminates this problem because you are frying only for the crust. It’s a fry first, braise to the finish dish so your only concern is a brown flavorful crust which makes it easy.

You can get a whole chicken and cut it up or buy various chicken parts, just know the gut capacity of your diners and buy accordingly. Once you’ve done this dry the chicken parts off, salt and pepper them, roll in flour and let rest while the oil is heating, then place the chicken parts in the oil with space around each piece and remove when the pieces start to color up.

While this is happening you get a good handful of parsley (flat or curly) and mince it finely, same with the garlic – very fine for both. And this is where the recipe got a little strange for me. When I read the instructions from Nike Kopanica Wood I’m thinking, “butter pats….one side smashed in garlic….one side smashed in parsley…one pat per piece,” what in the world?? It seems like a lot of work when you could just sprinkle the seasonings on top and have done with it. However, Nike is a great cook so I figured I’d do it her way…at least the first time. So I cut the chilled butter into pats about a 1/3 inch thick, pressed them down into the garlic, flipped them, then dredged the other side in parsley (kinda fun actually) then laid them on the pieces of chicken as directed. You can see below how interesting it looks and I thought, well it makes for a cool pic so not a total loss. I put a couple of tablespoons of water in the bottom of the pan, covered it, and put it in a 350 degree oven for about an hour. I checked it from time to time because slow cooked meats will throw off differing amounts of liquid, some more, some less, hence the small amount of water to start. You want to create a little steam at the beginning before the chicken starts to render its juices. You also want to check the dish a time or two during cooking. If there isn’t enough liquid you can add another teaspoon of water. After an hour I took the lid off. Then I got it. The whole butter pat routine. Because what happened was that some of the garlic and parsley flowed down to the bottom and mixed with the chicken juices and some stayed on top so that the meat was being flavored from both sides. The braising method mellowed the garlic and mixed perfectly with the parsley. My take away from this was nevermore to question the wisdom of Nike or the years of Croatian cooking that produced it! My contribution to the recipe consisted of dusting it with paprika and serving it on toast. Nike had suggested potatoes and I’d further suggest that if you’re missing either toast or potatoes just knock back a shot glass of the wonderful gravy.

And last but not least – this recipe is not improved by tweaking with more or different herbs etc… It’s supposed to be a dish of three distinct flavors. Chicken, garlic, and parsley. The last two are traditional in Croatian cooking and if they’re both fresh they’ll provide all the flavor you need. Takko Chicken
Print
Author: Carine Clary
Recipe type: Chicken
Cuisine: Croatian
Serves: 4
Ingredients
Instructions
Notes
Since this is a slow braised dish you want to add a little water at the start to create steam. The juices coming off the chicken and the butter will make your gravy for you.

Check the dish a couple of times during cooking. If the chicken isn't rendering as much broth as you like, add a couple more tablespoons of water. The objective is for the garlic and parsley to gently steam on and under the chicken. You don't want either to get brown or bitter.
3.2.1311