But on to the topic at hand. I was introduced to this version (the one & only) at Rocky & Carlos restaurant by my father who used to frequent Angelo’s bar down the road. Angelo’s was decidedly not femme friendly and so when the owners and their wives committed to a full service restaurant they included “Ladies Invited” on the front window, and although I was a very little lady, I was in. The portions were so big we would get one meal plus an extra plate and I’d pick off Daddy’s.

My favorite was the mac n’ cheese and this version is my version, the biggest difference being the crunchy topping but if you’re a R & C purist you can leave that off. As long as you get it browned under the broiler you’re good. 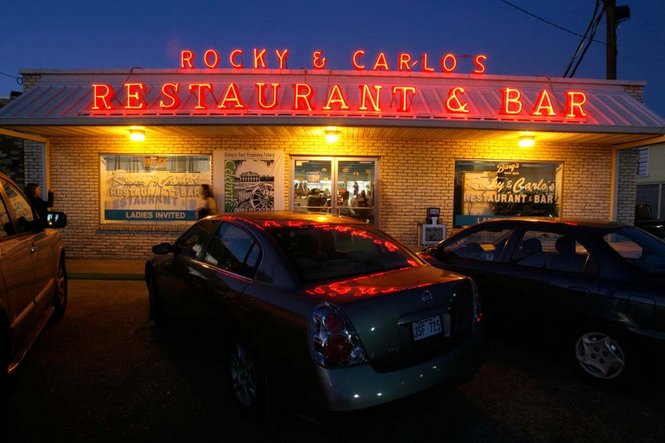 I use cheddar and fontina in equal portions both in the sauce and on top of the finished dish. I make the sauce first and set it aside with the pot lid on while cooking the pasta. It’s an easy bechamel white sauce and when it’s cooked to the right thickness remove it from the heat. If it’s really hot, let it cool a few minutes. The sauce only needs to be hot enough to melt the grated cheese, which you should stir in gradually until just melted and incorporated into the sauce. Do not add the cheese to the sauce while it’s is still sitting over the heat, as that can cause the cheese to overcook, start to separate, and turn your sauce into an oil-slicked, curdled-looking mess. Don’t ask me how I know this – even experienced cooks can forget to cut the heat – and once curdled it’s not salvageable. And if you don’t have fontina you may use all cheddar or cheddar and jack cheese. Play it by ear.

While they’re boiling melt the butter in a sauce pan and add the panko stirring to completely coat.

Now drain the noodles, fold into the sauce, transfer to a serving dish, top with the crumbs and put in a 400 degree oven for ten minutes or until brown on top. You may also serve in individual chafing dishes as I’ve pictured here. This one is shallow and about five inches in width. The recipe will fill four of these if you go that route.