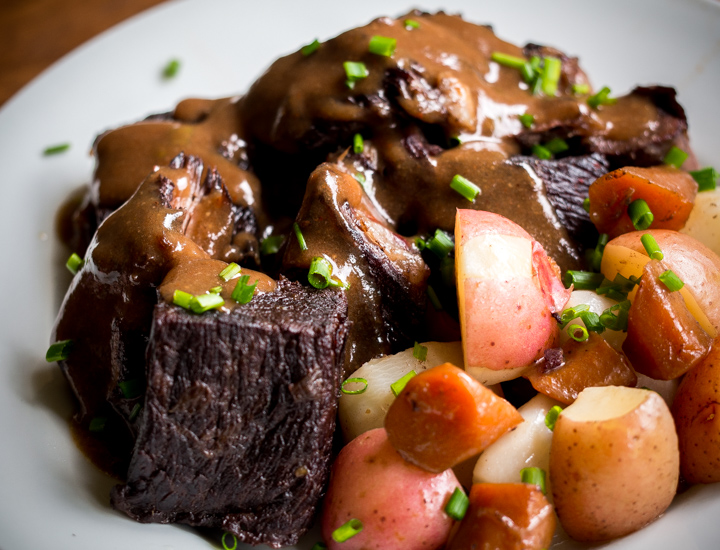 What do you do when you’re craving a special occasion cold weather dish on an ordinary day in the summer? You crank up the A/C and make it anyway!

Creole Pot Roast, also known as Boeuf Daube, is the Norlins version of a French daube and it differs from regular pot roast in several important ways.

For starters it’s more expensive and takes longer. That’s a result of browning the different ingredients separately and deglazing the pan with two kinds of liquor.

While doing the background research on this wonderful and oh so worth it dish I found that it’s almost as variable as gumbo as far as some of the ingredients are concerned. All versions seem to have carrots, but some have turnips, others parsnips, some use only yellow onions, others use onions and shallots. Most use cognac, but I like dark rum, and the type of herbs and their quantity are fungible (as long as you include thyme). The constant factors are browning the beef, deglazing with cognac/rum, and a long slow braise to the finish line.

Daube originated in southern France in the area of the Camargue near Spain and frequently bulls killed in arena bullfights were butchered and used for this dish. It was cooked in a daubiére which is a pot with a narrow neck that increases condensation. You can replicate this by putting foil underneath the lid of your dutch oven and you can go a step further and cut a circle of parchment paper and place it right on top of the stew before putting it in the oven.

Many of the older recipes use a less fatty cut of meat that requires larding but if you buy chuck the fat is already there as you can see in the photo.

If  you put the chuck into the freezer for about ten or fifteen minutes it will slice more easily into chunks like the ones below. The larger cuts make it easier to brown and later serve. And I don’t cut off any of the fat. It adds more flavor and will be skimmed off when the sauce is strained and reduced. 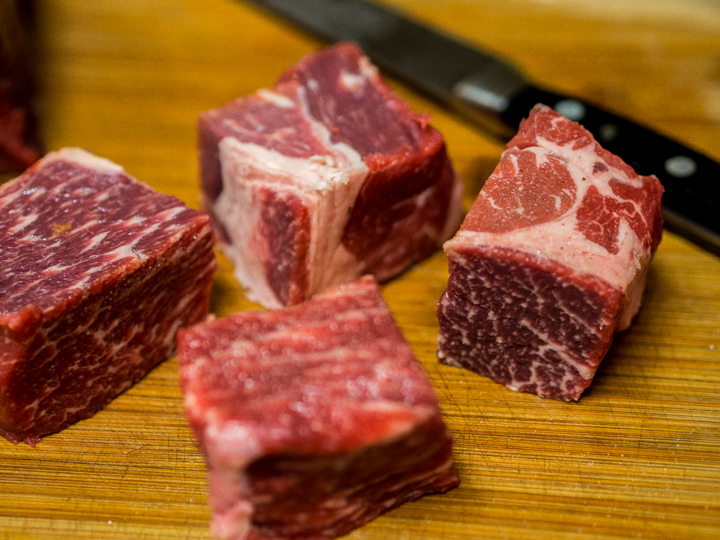 And why the bone you ask? Well, it’s just another layer of flavor. Good flavor. It can be the marrow bone I used here or a pig’s trotter, just remember to parboil and clean them well as described in the instructions. If you don’t like either of those, get a beef short rib, brown it in the oven for about fifteen minutes then add to the stew. The wine that the bones simmer in flavors the stew but it also extracts calcium from the bone and enriches it nutritionally (not that you’ll care once you taste it, but still…). 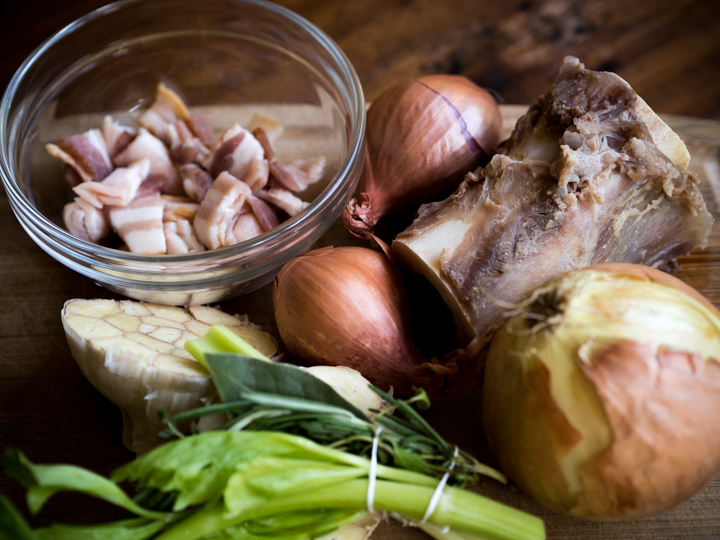 As for the herbs thyme is a must but it’s powerful so don’t overdo it. You can add a bit of powdered thyme in the sauce later if you want more or sprinkle a few leaves over the finished dish. Ditto for the rosemary. And don’t forget the celery and more importantly, the celery leaves. Hugely flavorful. Optimally, the herbs should be tied up in some cheesecloth but I didn’t have any so I improvised with some dental floss (also great for trussing a chicken).

So once you’ve parboiled and cleaned the marrow bone the order of business is as follows: pan fry the bacon and remove, add a little vegetable oil to the bacon grease (if necessary) and brown the beef chunks separately then remove, then saute whatever vegetables you’re including, next pour in the rum which will bubble up and lift all the browned bacon and beef bits into the liquid, let the rum almost completely evaporate before placing the marrow bone in the center and surrounding it with the browned beef. 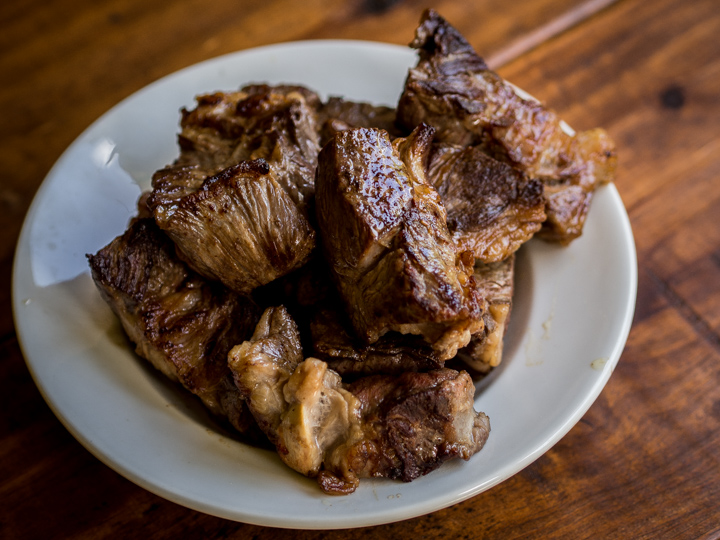 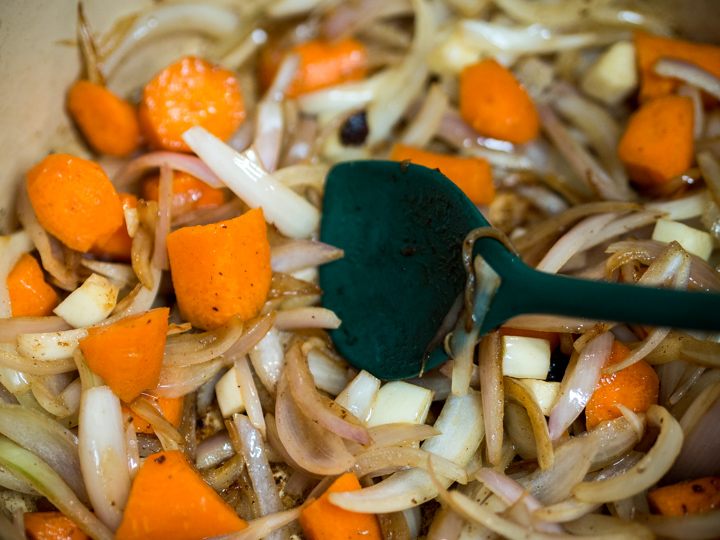 For the last lap you need to pour the wine over it all, arrange the garlic halves and herbs on top, let the wine come to a boil, then cover with foil, put the top on and place in a 325 degree oven for two to three hours. It shouldn’t boil dry but check periodically to make sure. It should still be mostly covered with broth as you can see below. 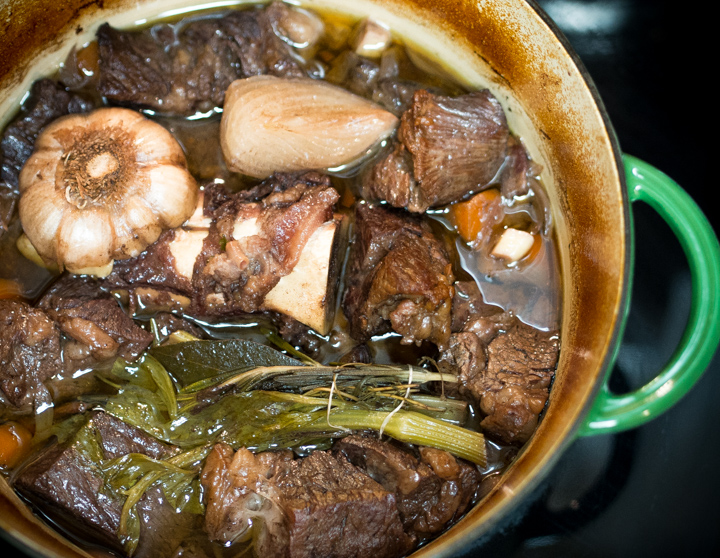 Finally, when it’s fork tender remove and discard the herbs, garlic head and marrow bone. (Not forgetting to spoon out and salt the marrow as a little pre supper snack.)

Once the meat and veg are cooling on a platter it’s time to focus on the gravy. If you’re in a hurry and don’t care, just skim fat, strain and serve. Or don’t strain. Your choice. If, however, you want something glossier than a super model’s hair try this. Pour the liquid into a smaller cool pot which you will then put into the freezer. After about fifteen minutes the fat will all have congealed at the top and will be easily skimmed off. Now make a paste of a teaspoon of cornstarch and a couple of teaspoons of water. Whisk that in, adjust seasonings (this is the time to add more herbs and possibly a bit of wine) and drop in a chunk of butter.

Now you are finished. Drizzle this over the meat and all will be well with your world for the next half hour. And news flash! It tastes even better reheated the next day so what are you waiting for? 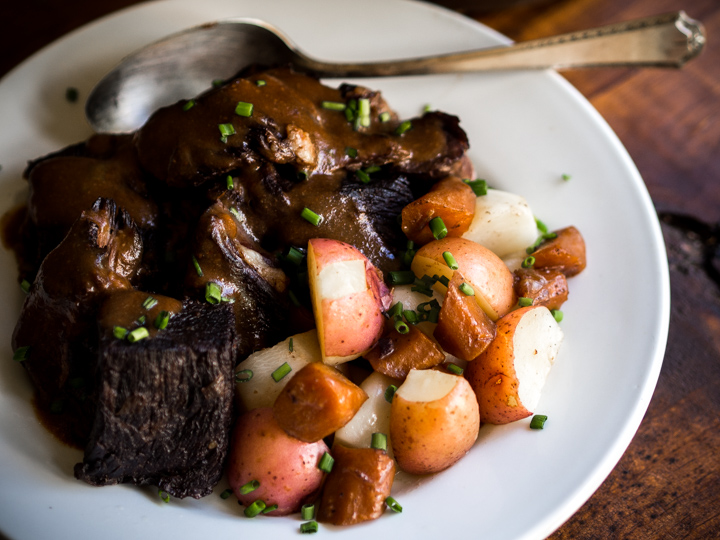 Creole Pot Roast
Print
Author: Carine Clary
Cuisine: Creole
Ingredients
Instructions
Notes
As you will no doubt have noticed there are new potatoes in the money shot! However, they are boiled separately and added to the other vegetables when served.

Another option if you have baking potatoes is to wrap them in foil and put them in the oven to cook with the stew.
3.3.3077