With quail season in full swing our thoughts turn to fresh killed broiled and spatchcocked quail. And I love that word “spatchcocked.” Sounds like something a British soccer thug would scream at the opposing team. I can just see them leaning forward on the bleachers screaming, “Spatchcockers!”

The word itself reputedly originated in Ireland where it’s a reference to “dispatching the cock,” as in killing and gutting the old rooster. If you do your own hunting that’s exactly what you’ll have to do to the quail, or multiples thereof if your shot was true.

When I was a kid my daddy would hook up with his oil company buddies, rent some pointers (yes, city slickers can rent dogs!) and head over to a little cabin in the Florida parishes where they could shoot, burp, leave dirty shorts on the doorknob and generally do all things prohibited on home territory. He’d return with a string of quail along with some woodcock and chuckar which my mother would pan fry in as many cast iron skillets as she could rustle up. She’d pour the drippings over the birds and we’d sop it up with those wonderful Pepperidge Farm white dinner rolls (not a baker, me mum…). But I still love those dinner rolls no matter what evil rumors are circulated regarding the nutritional deficiencies of white flour. If you want to be authentic go for biscuits or my version of fried grits. But whatever you do try it this way at least once and you may develop a cidery sweet tooth.

First make the glaze and since it takes awhile to reduce you can do it the day before or start it early on the day of the quail feast. The jelly used here to flavor the glaze is guava. You can use the same amount of another flavor but try guava. It’s just enough different from the usual orange marmalade and it lends a bit of a semi tropical feel to the dish. While that is going you should butterfly the quail, season with thyme, salt, and pepper and run it under the broiler. About four to five inches under does the trick. They cook fast so don’t wander too far.

If you are serving this to man people you may want three per serving depending upon the number and quantity of the sides. If you serve them with fried grits you can go a little lighter on the meat since the grits will occupy a lot of thoracic real estate. However, if you’re serving this to adolescent boy people you’re gonna want to bring down a whole flock. Excellent on a crisp winter day, run ’em under the broiler, swab with the guava glaze, then plate up.

And don’t forget to have your insignificant other pop the top on the extra bottles of hard cider you’ve bought. Now bring to the table and enjoy. Garbure is the old French way of making a soup out of greens, white beans, and stew meat. This version is from Maylie’s Restaurant and adapted from the recipe of Mme. Esparbé.

It’s a winter dish so it’s going to have dark greens like kale or collards or cabbage (or all three) and whatever else strikes your fancy. As is the case with all soups, amounts of the vegetables are somewhat fungible. You might have only kale or only cabbage, that’s ok. Use this as a guide and scour the fridge for leftovers to include. Make sure the seasoning meat be it pork or poultry is on the bone. This makes for a silkier and more nutritious broth. The potato chunks should be on the large side since if you want them to hold up during reheating. Garbure
Print
Author: Carine Clary
Recipe type: Soup
Cuisine: Creole
Ingredients
Instructions
Notes
If you've prepared some duck or goose confit and have an extra leg and thigh portion you can substitute that for the ham hock. It's my favorite way of making this soup although it's fallen somewhat out of fashion.
You may substitute a can of white beans if you like.
You can substitute for the onion, one half diced onion and two diced leeks.
Also optional is a teaspoon of juniper berries.
3.4.3177 Better known in these parts (Casa Clary that is) as Speedy Apple Cake, One Layer Apple Cake or One Bowl Apple Cake. It’s the cake you make when the human locusts that constitute your family members are clamoring for something sweet and there are no cake or brownie mixes at hand. This is better anyway not to mention that it both looks and smells wintry.

It’s the flatter faster sister of the monster apple bundt cake that never seems to cook all the way through.

The version here differs from many others because it’s a little moister and it has much less cinnamon. Most recipes have two teaspoons of cinnamon which is too crazy much. Completely overwhelms the apples. If you’re that into it get candy apples or snort the cinnamon before you eat the cake. On the other hand, pumpkin pie spice is great because it’s a little bit of a lot of different spices and the subtle interplay enhances the apple flavor without destroying it. And if you don’t have pumpkin pie spice, substitute the same amount of cinnamon. Just don’t overdo it (unless you have unfulfilled cinnamon addiction issues).

Now get out your one mixing bowl and remember – even for a cake this simple there are variations. You can use any kind of apple but I prefer the harder tarter versions like Granny Smith or Golden apples. If you’re unsure just give it a good squeeze. It should feel very firm.

As for the vegetable oil use whatever is on hand. Lighter versions of olive oil are also fine and if you have a lemon flavored olive oil that can make for an interesting variation.

So what are you waiting for? Find that one bowl, fill it with good things and enjoy! When halved this cooks up well in a six inch by 2 inch little pan. Perfect for a light quick cake for four. Here it is below with some toasted almonds up top: 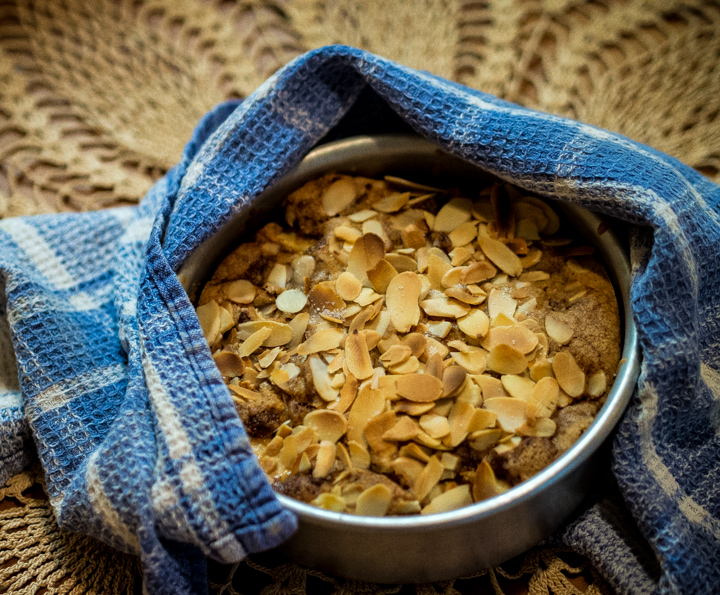 Apple Cake
Print
Author: Carine Clary
Cuisine: Southern
Ingredients
Instructions
Notes
This dough is fairly thick so just spoon it into the pan.
You can substitute bourbon or rum for the vanilla.
If desired you can zest some of the lemon into the batter before adding the flour.
3.4.3177 Cooked out? Suffering from post-holiday baking and roasting fatigue? Yes and yes?

Then make a pit stop at your local purveyor of rotisserie chicken, ribs, or brisket and pair that meal with some of this slaw and you’re good to go. Unlike all the things you ate during the holidays it’s healthy but it’s still tasty so you’re not going to be suffering from flavor withdrawal.

For years I experimented with different coleslaw dressings only to be disappointed with the flavor or the consistency. Even when it tasted ok it would go all watery at warp speed which is fatal for leftovers. Most restaurants seem to wrestle with this problem since the really good slaws are few and far between.

I had always stayed away from boiled dressings because…you know…they’re boiled and that’s a pain. But the persistent mediocrity of my previous efforts forced me to try this and guess what? It’s not only not a pain, it’s extremely easy and fast.

It’s dry ingredients plus wet ingredients stirred over a double boiler for a couple and it’s done. Since egg yolks are the binding agent it cooks very very fast – perfect for ADD salad fans. The other perfect thing about this dressing is the fact that you can make it, keep it in the fridge for 4 or 5 days, and add it as needed to individual salads. I keep it in a separate jar and as you can see below it’s hovering out of focus in the background behind the undressed slaw. However, if you go ahead and make enough salad to use up the whole thing at once it will stay creamy in the fridge for up to a day.

So toss and enjoy something healthy until the next holiday glutton fest! Coleslaw with Boiled Dressing
Print
Author: Carine Clary
Cuisine: Southern
Ingredients
Instructions
Notes
You may shred the ingredients in a food processor, but it looks better and has a better consistency if shredded on a box grater or mandolin.
If you do not have a double boiler use a heavy stainless steel pan and cook the dressing over a very low heat. If it does over cook and you get some curdling, just strain it and it will be fine.
Parsley may be added to the dressing after it has cooled.
Other good additions are shredded celeriac and radish.
This dressing can also be used in place of mayonnaise in potato salad.
3.4.3177